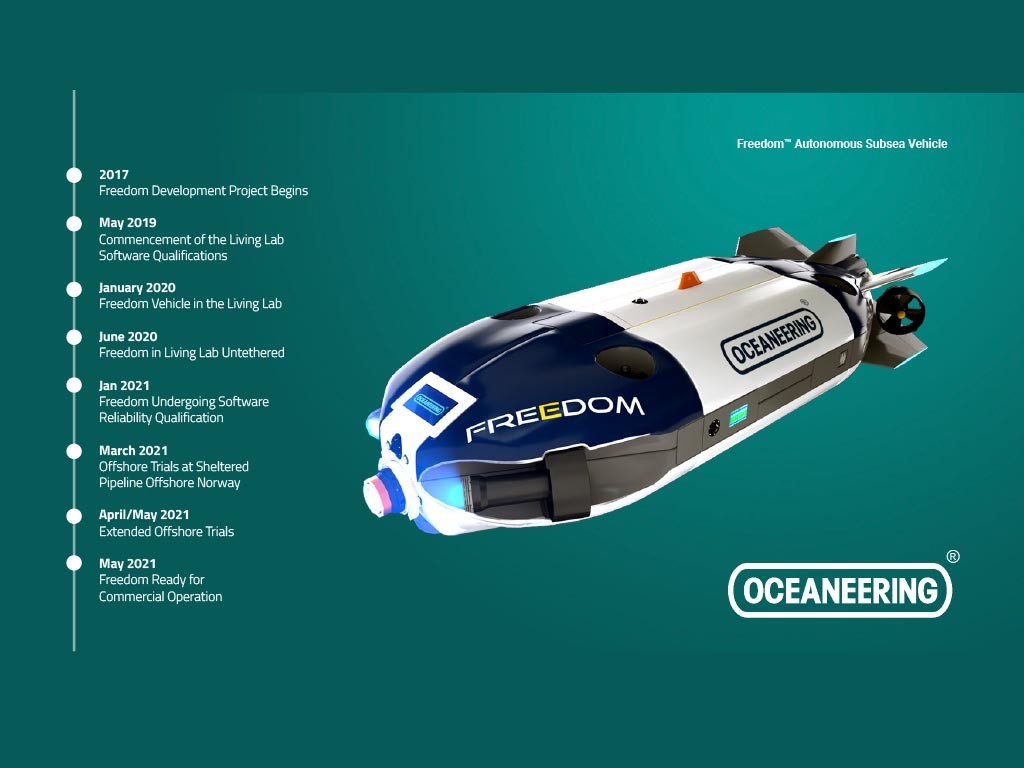 Advances in secure, reliable communication networks, software, batteries, and positioning sensors have pushed forward the development of resident and autonomous vehicles in the near-term. Because of these advances, these vehicles can accurately position themselves and receive missions to gather data and safely send it back to shore for analysis.

In the long-term, autonomous underwater vehicles (AUVs) used for survey scopes will have to become more autonomous and work for longer durations than current functionality allows. Oceaneering continues to advance subsea residency and autonomy for AUVs with our Freedom™ Autonomous Subsea Vehicle technology.

Since 2004, Oceaneering has been at the forefront of remote piloting and control technology (RPACT), which allows subsea vehicles such as remotely operated vehicles (ROVs) to be piloted from shore. Advanced subsea vehicles are benefiting from increased 4G offshore coverage along with faster, stable, and more cost-efficient satellite communications. Additionally, more offshore installations have direct fiber to shore connectivity resulting in lower latency and higher fidelity connections.

Oceaneering’s Freedom™ Autonomous Subsea Vehicle provides a new level of efficiency by combining the work class functions of an ROV with the speed, range, and maneuverability of an AUV. Freedom is supported by a docking station at seabed and can operate in two modes: remotely piloted via tether to provide real-time control – or operated in an autonomous and tetherless configuration. The vehicle boasts a working range of 200 km, a working depth rating of 6000 m, speed of 6 knots, and subsea deployments of up to six months.

The case for a hybrid autonomous and resident remote vehicle like Freedom, particularly in the North Sea, is evident. For example, offshore in the North Sea, there are dozens of fields and associated pipelines located within a 100 km of the coastline. With the Freedom vehicle’s long reach, it can be easily launched from shore to service these assets, dock subsea as a resident vehicle, recharge, transfer data, and move between fields to support other assets as needed.

Freedom can inspect miles of flowlines and remote wellheads as it flies around the field. The vehicle, like our Liberty™ E-ROV resident system, can be remotely piloted from an Oceaneering Onshore Remote Operations Center (OROC) while in tethered, free-swimming mode. While in autonomous mode, free of the tether, its advanced autonomous software enables high quality inspections of infrastructure.

Oceaneering envisions the future of offshore energy industry robotics being a combination of man-in-the-loop operations, like our traditional ROVs, as well as autonomous capabilities, without anyone in direct control of the vehicle, being used to complete parts of a work scope. The line between what is remote controlled and what is autonomous will become increasingly blurred in the near future, so much so that we anticipate many vehicles must have the capabilities to operate in both scenarios.

Freedom’s software enables the vehicle to carry out low altitude pipeline inspections for pipeline surveys. The vehicle can track pipelines 2-5 m off the seabed to provide high resolution data survey altitudes and at 8 m for reconnaissance.

This configuration of the vehicle enables pipeline tracking with unprecedented proximity and tolerances, providing significantly improved data acquisition. However, tracking a pipeline this closely adds complications. To compensate, the software includes a heightened level of obstacle detection, autonomous obstacle avoidance, and situational awareness. These features allow the vehicle to re-plan its route and re-engage with the tracked pipeline. Freedom has been outfitted with Sonardyne’s SPRINT-Nav navigational instrument as well as Teledyne’s Reson T20 technology.

The team has focused on the continual advancement of the system’s pipe tracking and sensor fusion algorithms throughout the software development process. Increased focus has also been dedicated to achieving the highest-possible quality of data for the end client while advancing work in subsea obstacle avoidance and object of interest inspection routines.

Software reliability and failover tolerance has been another area where the team has achieved marked improvement. The intensive qualification process also has put a large focus on our reliability engineering and potential hazard identification. Findings from live testing at our dedicated facility in Norway have supported the development of our reliability engineering and ensures that learnings are continuously rolled into the product as part of our continuous improvement process.

To ensure that the Freedom autonomous vehicle meets its specifications (range of 200 km, a depth of 6000 m, speed of 6 knots, and durability of up to six months subsea), a rigorous testing schedule was required.

In March 2019, Oceaneering created a Subsea Test Site near Stavanger, Norway, devoted to the development, testing, and verification of the new control software and the next-generation vehicles.

From the test site, a vehicle can be launched and controlled from the quayside and navigate to a shore-side obstacle course, which includes a subsea docking station and various pipelines designed to replicate an offshore environment. This setup is used to ensure the software works as intended and is thoroughly tested for reliability.

The test site enables daily testing of Freedom’s software and hardware, both in very shallow water and water depths of up to 300 m. The facility and the test vehicle are used to evaluate software modules as they are being created by Oceaneering’s highly experienced internal software development team. The team is based in both the US and Norway, which allows near-round-the-clock development testing and verification.

The software platform was qualified in May 2019 using a prototype test vehicle that was robust and well suited for the testing environment and enabled us to bump the vehicle while testing the autonomous software. In the water at the test site, we can simulate the offshore environments that the Freedom vehicle may encounter with a variety of pipeline types at depths ranging from 10 m to 240 m.

In January 2020, the Freedom vehicle arrived at the test site for testing in water. In June 2020, we began testing the vehicle untethered. It is currently at an API Technology Readiness Level (TRL) 5. In September 2020, Freedom completed the industry’s first autonomous subsea docking operation using Equinor’s newly developed UID Docking Station at our Norwegian test facility.

Offshore trials will begin at a nearby sheltered pipeline in late February 2021 and run for approximately one month. This phase will enable the team to verify all autonomous features of Freedom on a real pipeline in a sheltered location during the winter. Another objective will prove the hydro-acoustic control for supervised autonomy and subsea launch and recovery into our docking cage using machine vision and advanced autonomous docking algorithms. After these tests, the Freedom vehicle will move offshore for final qualification trials on offshore pipelines in UK and Norway sectors. These trials are expected to be completed by April/May 2021, whereafter the technology will be qualified to TRL 6 and ready for commercial operation with our customers around the world.