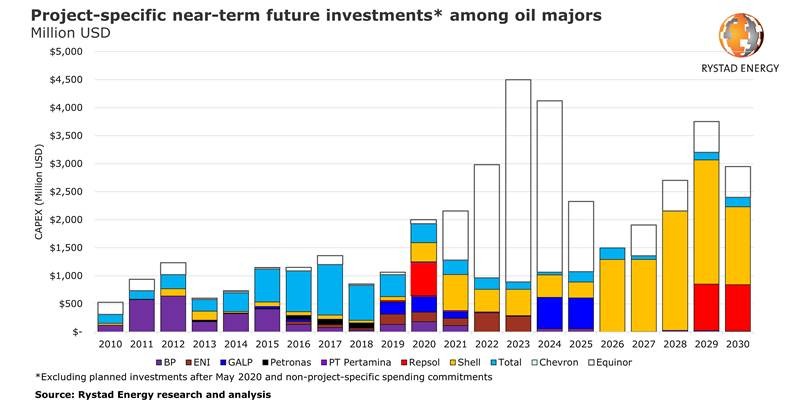 Among oil majors promising renewable investments, only one stands out as leader of the pack

Investments in solar and wind energy projects by the world’s oil majors until 2025 are expected to exceed $18 billion, a Rystad Energy analysis finds. But a closer look at the numbers reveals that some $10 billion, or 55% of the amount, is expected to be invested by a single company, Equinor, the only operator poised to direct a majority of its greenfield capex towards renewable energy projects.

Equinor, the Norwegian state-controlled energy giant, will drive renewable investment among majors, spending $6.5 billion in the next three years to build its capital-intensive offshore wind portfolio. We do not expect this forecast to be heavily affected by the fluctuating oil price or capex cuts, as much of the company’s renewable portfolio is already committed, such as the massive Dogger Bank offshore wind project in the UK.

Rystad Energy’s analysis takes into account solar and wind investments that were announced prior to 1 June 2020 and that can be pinpointed to specific projects. Oil majors have pledged more funds to renewable energy targets than those listed in this outlook, but we have chosen with this analysis to exclude spending plans that are not project-specific, given the heightened uncertainty of those investments actually being made.

If Equinor is removed from the outlook, renewable investments from major oil and gas companies can be seen in a very different light, showing decline over the next three years. This fall does not even factor in any of the recent capex cuts announced by the majors.

“Recent suggestions of ‘resilient green strategies’ or ‘business as usual’ simply do not carry much weight, with the exception of Equinor. Not until later in the decade do we see an increase in renewable spending from other companies,” says Rystad Energy’s Product Manager for Renewables Gero Farruggio.

After Equinor, the runner-ups are Portuguese operator GALP, directing just under a quarter of its greenfield expenditure to green initiatives, and Spanish operator Repsol, which has pledged €600 million to three projects this year.

Rystad Energy’s analysis finds that almost all of the renewable investments by oil and gas players will come from only 10 oil majors, which are collectively poised to spend just over $18 billion on specific renewable energy projects through 2025. This tally, however, pales in comparison to the $166 billion they are forecast to spend on greenfield oil and gas projects during the same period.

With the notable exceptions of Equinor, GALP and Repsol, the investments in renewables by the other oil giants will not even match the typical capex requirements of a single oil and gas field in their respective portfolios.

If needed due to the Covid-19 pandemic, a 20% capex cut across overall investment portfolios could be achieved while easily avoiding any cuts to renewable projects. GALP and Shell look the most exposed to potential renewable spending cuts, but these companies are not expected to make significant renewable investments in the near term – not before 2024 for GALP and even later for Shell – by which time we expect the oil price will have recovered, thus creating a better environment for investment.

But Covid-19 could also be the catalyst for oil majors to pump more capital into renewables, acquiring assets, developing skills and nurturing the capacity to transition beyond petroleum.

“The pandemic is creating a number of distressed sellers and reducing acquisition costs for assets and companies, thereby creating opportunities for Big Oil to accelerate its energy transition through acquisitions. And with E&P companies announcing deep spending cuts, we may yet see a ramp up in renewable investments as recent headlines suggest, facilitated by new mergers and acquisitions,” adds Farruggio.

Advisory: Our analysis is updated to include Repsol’s 2020 planned renewable energy investments. Please also note that French major Total revealed on 3 June 2020 that it will acquire a majority stake in SSE’s Seagreen 1 offshore wind farm project in the UK for about $3.7 billion, which is not included in this analysis.