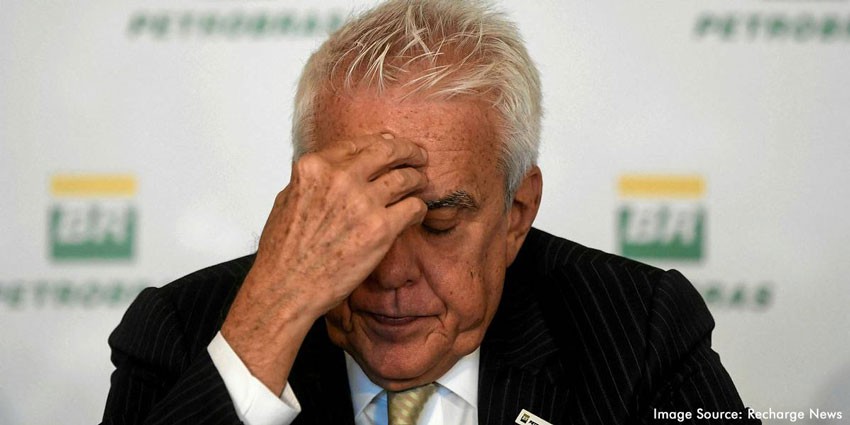 Brazil's state-controlled oil company Petrobras will scrap plans to invest in renewable energy projects, but says it will continue research and development projects in the field, according to chief executive Roberto Castello Branco.

“If we decide to enter the game [of the renewable energy sector] we want to enter to win, we will not rush in without thinking just because other oil majors are doing so. We don’t want to lose money,” he told reporters during a press conference about the company's second-quarter results.

“Secondly, there is a lot of marketing and only a few real, actions. There are people announcing that they are committed to ‘better energies’ and what have you, but if you look at the European companies, the ones that are leading announcements in renewables, the projections for the participation of renewables in their revenues in 2030 is of 1%, 1.5% tops."

Castello Branco, a University of Chicago-trained economist, former central bank director and boss of Rio de Janeiro-based free-market think-tank IBMEC, was appointed to run Petrobras by far-right president Jair Bolsonaro when he was sworn in January.

Castello Branco’s leading mission is to divest from activities not related to upstream oil & gas operations. The sale of domestic and international assets such as gas transport and stakes in productive oil fields has raised R$34.5bn ($9bn) and was one of the main reasons for the company’s record net profit of R$18bn in the second quarter.

Castello Branco's decision not invest in renewables adds to recent declarations and actions by Bolsonaro government against investments to help control global warming — and follows the firing of the head of country's space research institute (INPE) after Bolsonaro himself said that INPE's report of a recent surge in Amazon forest deforestation was a lie.

But, for Petrobras, the backing away from renewable energy comes as the company was leading Brazil’s offshore wind debut, with the development of a 5MW pilot programme in northeast Brazil.

Petrobras had also recently signed Memorandum of Understandings (MOUs) with Equinor and Total to develop projects in offshore and onshore wind and solar PV, as well as other renewables opportunities.

Although, Castello Branco said these MOUs would continue and brushed them off as “mostly research and development”, the deal signed in December between Total and Petrobras was to jointly develop 500MW of onshore wind and PV.

“It is forbidden to lose money,” said Castello Branco, indicating that the sale of midstream and downstream assets will continue and casting doubts about the profitability of renewable energy investments by oil majors.

After seven months as CEO, Castello Branco has revised the company’s 2019 capex down from R$16bn to R$11bn. Of the $4.9bn invested so far this year, 83% has been in upstream activities and only 3% in “other activities”, which includes power and renewables.

But the company’s US$84bn long-term strategic plan for the 2019-23 period has yet to be revised. In the current version of the plan, also announced in December, the company had allocated $417m to renewables investments.

Petrobras has interests in power generation, with 9.6GW of mostly fossil fuel and natural gas capacity, but it also has 104MW of operating wind power capacity, a 1MW experimental PV plant, and interests in biofuels.

Meanwhile, BP, Equinor and Total continue to invest in solar and onshore wind assets in Brazil.

Petrobras' total divestment plan is estimated at US$15bn, of which US$13bn is expected to be concluded this year.