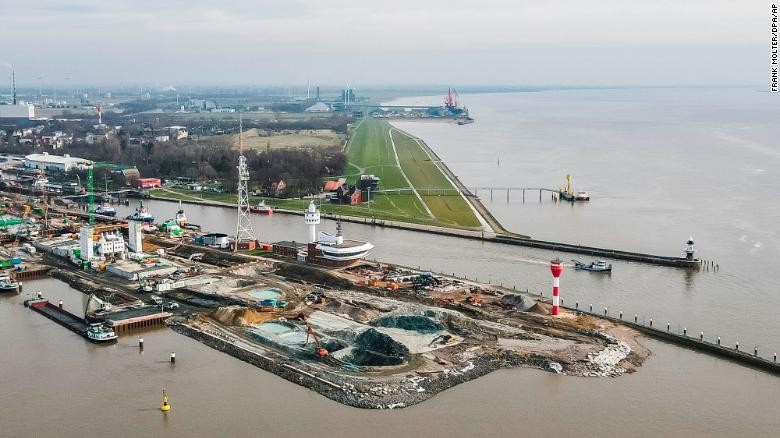 'Drill, baby, drill' is back in Europe as gas crisis looms

The 10-mile-long island of Schiermonnikoog is known as one of the most beautiful places in the Netherlands, boasting the widest beach in Europe, 300 different species of birds and a bustling tourist trade.

But after the Dutch and German governments approved the development of a new gas field roughly 12 miles from Schiermonnikoog's shores, the island's mayor is anxious about its future.

"We are very concerned that the gas drilling will damage the area," Mayor Ineke van Gent told CNN Business. "We also believe that there is no need to drill [for] new gas at all and that we should invest much more in renewable energy."

The gas project, which spans German and Dutch territory in the North Sea, is just one venture that has been greenlit or is getting another look in Europe and the United Kingdom after Russia invaded Ukraine. Europe is desperate to secure gas supplies that can't be cut off at Moscow's whim. Last week, EU leaders set a voluntary target to reduce gas usage by 15% through March 2023 to evade a crisis once the weather turns.

An energy supply squeeze could push prices even higher, sparking a wave of blackouts and leaving vulnerable households unable to pay their bills.

Yet scientists, activists and locals in places like Schiermonnikoog are frustrated. They believe that governments are using the war in Ukraine as political cover for projects that won't go live in time to help this winter, and which could ultimately make it harder to get a handle on global warming.

The gas field near Schiermonnikoog isn't scheduled to start delivering gas to Dutch and German households until 2024. Once turned on, it could be operating for decades, with licenses valid until 2042.

ONE-Dyas, the Dutch company running the development, said it has been in frequent contact with local stakeholders since 2018, and conducted an extensive environmental impact report that was reviewed by regulators. Domestically-produced gas also has a lower emissions footprint that natural gas that's imported from other countries, it added.

Europe's scramble to secure gas supplies comes as Russia signals its willingness to punish the bloc for its support of Ukraine. State-owned Gazprom recently slashed flows through the crucial Nord Stream 1 pipeline to 20% of daily capacity.

The situation in Europe is "perilous" and the region must prepare for a "long, hard winter," according to Fatih Birol, executive director of the International Energy Agency.

Even if European countries manage to fill their gas stores to 90% of their capacity, the region is still likely to face supply disruptions early next year if Russia decides to cut off gas deliveries from October, the IEA said.

The risk has energized countries to find alternate fuel sources and conserve what they can.

It has also empowered politicians to back an expansion of the gas sector with a conviction that would have been unthinkable just a year ago due to climate concerns. Since February, government officials have lifted production caps and approved new drilling sites, often citing the need for pragmatism during a period of high stress.

Denmark, which in 2020 announced plans to phase out fossil fuel production, is boosting extraction from North Sea fields that already have licenses. Hungary has said it will hike domestic natural gas production to 2 billion cubic meters from 1.5 billion cubic meters. Shell is proceeding with a new natural gas development in the North Sea after the UK government gave the go-ahead in June, reversing a previous decision to block the project on environmental grounds.

"We're turbocharging renewables and nuclear, but we are also realistic about our energy needs now," Kwasi Kwarteng, the UK business and energy secretary, tweeted after the decision. Average energy bills in the United Kingdom could top £500 ($613) for January alone, according to a new report from consultancy BFY Group.

Meanwhile, governments are racing to expand their capacity to receive liquified natural gas, or LNG, which is an attractive alternative to gas from Russia because it can be shipped from allies on tankers instead of delivered by pipelines from Russia. Global Energy Monitor, a US think tank, counts at least 25 projects to build or expand LNG terminals in Europe and the United Kingdom that have been newly proposed or revived since outbreak of the war in Ukraine.

"You're just seeing this 180-degree turn around the world," said Oswald Clint, an analyst at Sanford Bernstein who covers the energy sector.

Some of these gas projects could increase energy supplies for Europe this winter in case Russian President Vladimir Putin turns off flows from Russia.

Canada's Zenith Energy, which said last month it's reactivating a well in northeast Italy that will yield 1,300 cubic meters of gas per day, expects production to commence between October and December.

Luca Benedetto, the chief financial officer, said in a statement that the decision was made "in the context of the increasing necessity for European domestic energy security and a highly encouraging pricing climate."

Others won't launch for some time. Shell estimates that the Jackdaw gas field in the UK's North Sea will come online "in the mid-2020s." A floating terminal that can store and regasify LNG, which was recently purchased by Italian gas infrastructure operator Snam and will be installed near the coast of Ravenna, won't begin operations until the second half of 2024.

Tara Connolly, a gas campaigner with Global Witness based in Brussels, said one of her concerns is that the projects won't be necessary once they're actually completed.

"Just before Ukraine, there was really a sense that Europe had enough gas infrastructure, even in the event of a significant disruption," Connolly said. "Now it's really a different picture."

Plus, given the timeline, renewables could fill the gap instead of natural gas, which has a lower carbon footprint than oil and coal but still contributes to global warming, according to Connolly.
The ecological risk

It's a view shared by the mayor of Schiermonnikoog. She's also worried about the protection of a sensitive UNESCO World Heritage site.

"My main concern is [the] sinking of the soil, which means that we also have problems with living on the water," van Gent said.

Not far away, the onshore Groningen gas field — a joint venture between Shell (RDSA) and Exxon (XOM) that was once one of the biggest sources of European gas supply — is being wound down because of earthquakes. A report in 2016 found that there had been 271 seismic events of a magnitude 1.5 or larger.

That's less of a problem for the field near Schiermonnikoog, which will be out at sea. But the ecological impact should be considered, too, according to Dolman, the scientist who along with 432 others signed a letter opposing the new Dutch development.

"It's in a nature reserve area, so it sort of doubles down in terms of impact," he said. "You should be careful in these areas to do anything, let alone start new gas production platforms."

Carsten Mühlenmeier, president of the German regulatory agency in charge of North Sea permits, said that the "territorial sea is a sensitive area where undisturbed use should be favored over mining and private interests," especially given the need to decrease demand for fossil fuels. Still, it gave its okay once the Netherlands signed off and as the political winds shifted in Berlin.

"The Russian war of aggression on Ukraine proved that guaranteeing a supply of energy is a challenge, which overrides certain safety measures, especially environmental concerns," Mühlenmeier told CNN Business.

Greenpeace has sued the UK government over its approval of Jackdaw, claiming its environmental assessment of the project was flawed since it didn't examine emissions from burning natural gas.

"It is completely irrational for the government to approve — and heavily subsidize — a project like Jackdaw that does nothing to address the energy price crisis while contributing to climate change," climate campaigner Lauren MacDonald said. "Our dependence on fossil fuels is at the root of both crises, yet the government continues to try and plow ahead with new oil and gas projects."