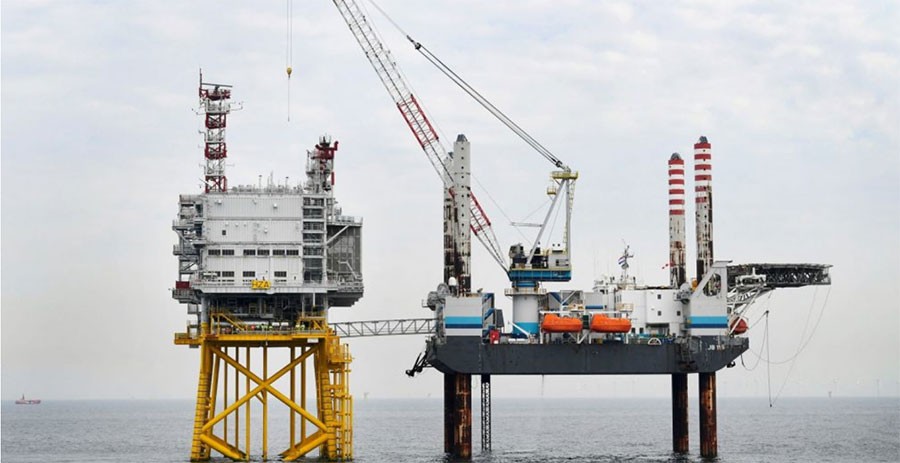 Wind turbines, floating solar panels, and green hydrogen at sea are among the projects under construction off the Dutch coast, as a country famed for its water engineering prowess builds out its renewable energy infrastructure.

On a tour of North Sea facilities on Aug. 25, companies and Dutch utilities showed off key projects.

At Hollandse Kust Zuid, a 1.5 gigawatt (GW) wind farm scheduled for completion next year, ten out of the 140 turbines are already producing electricity. Sweden’s Vattenfall made headlines when it won the concession to build the farm in 2018 without government subsidy.

Electricity from the farm is converted to a higher voltage and sent to shore from a station completed in July by Dutch grid operator TenneT.

“That’s a 700 MW platform,” said TenneT CEO Manon van Beek, pointing to the HKZ “Alpha” station. Dozens like it are under construction.

“Only here in the Netherlands we’re going to connect more than 20 Gigawatts (of wind power) before 2030,” she said.

Other projects include “Oceans of Energy” – a 1 megawatt (MW) cluster of floating solar panels.

CEO Allard van Hoeken, said the design is “not so far” from being economically viable, thanks to falling solar panel costs. He has plans to built 3MW and 50MW projects next.

On Thursday, the panels were partly covered by a flock of seagulls, but Van Hoeken said they are welcome.

“As soon as some waves arrive, the birds will leave,” he said.

At the nearby “PosHYdon” project, Neptune Energy is preparing to convert electricity to hydrogen and send it to shore via existing natural gas pipelines.

While that process is currently uneconomical, engineers believe in the long run electricity will be cheap, and it may make sense to convert some to hydrogen for use in transport or steel-making.