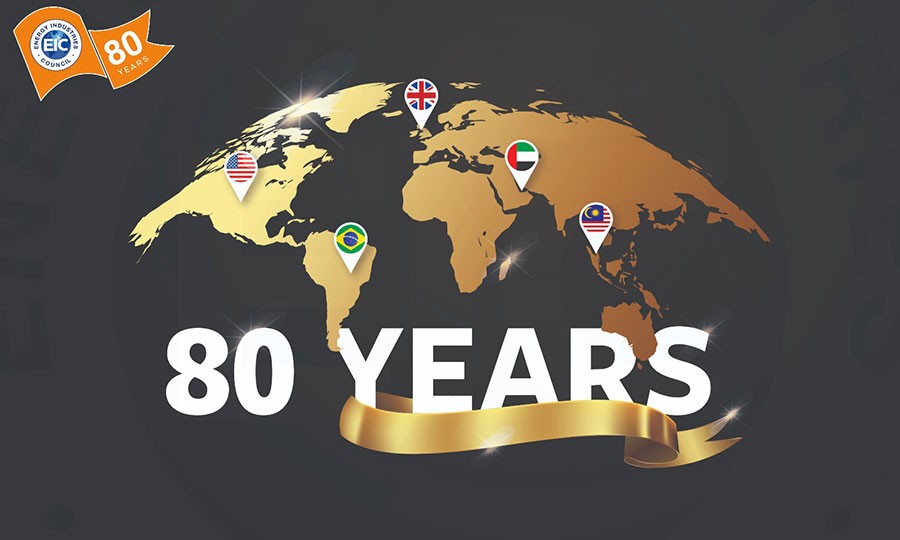 EIC Celebrates 80 Years of Service to the Energy Supply Chain

Founded in 1943 by 13 British petroleum equipment manufacturers, the EIC has grown to a membership of over 800. The EIC moved beyond oil and gas to become fully energy agnostic in 1981, expanding its coverage to include the entire energy industry. Today, EIC members work in diverse markets including, renewables, nuclear, hydrogen, carbon capture, power, and oil and gas.

The EIC is now a fully global business, and this started in 1994 when the Board approved the council’s first overseas office opening, in Houston. This ultimately led to the EIC moving from representing UK-based companies to serving the interests of energy supply chain companies globally. Today, 300 of its members are based internationally.

“The EIC has developed a unique and powerful global network of energy companies that provides its members with one of the world’s most effective sources of customers, suppliers, and partners. We work hard to help our members to export, diversify and grow,” EIC Chief Executive Officer, Stuart Broadley, said. “World War II was still raging when we were established, and our founding members wanted help to take a higher share of their domestic and international markets in oil and gas projects. We still basically do the same thing today as we did in 1943, but of course now across all energy sectors and on a much more international basis.

He continued: “We are proud to be the voice of the energy supply chain. Our team of 110 incredible people, headquartered in London with offices in Dubai, Houston, Kuala Lumpur, and Rio de Janeiro, work tirelessly for our members, as well as with many other key stakeholders, including governments. Going forward, we are determined that EIC’s next 80 years to be as successful as our first.”

The EIC hosts over 130 events every year, where members and clients network and meet with industry officials. The Aberdeen-based Energy Exports Conference (EEC), to be held this year on the 6th and 7th of June, is the EIC’s flagship event. EEC aims to facilitate export opportunities for energy supply chain businesses with project decision-makers from around the world.

The EIC is also the purveyor of reliable and up-to-date data and analysis through its market intelligence and consulting units. EICDataStream provides information on upward of 12,500 in-development and planned energy projects. EICAssetMap provides details pertaining to over 40,000 energy projects globally. EICSupplyMap helps clients identify energy supply chain businesses in the UK with its database of over 3,500 companies. This year, EICSupplyMap commences its journey toward full global coverage, starting with Brazil, Malaysia, the UAE, and the US state of Texas.

Troy Stewart, Head of Energy Industries UK and Ireland at ABB Process Automation (UK), one of EIC’s founding member companies, said: “EIC is a trusted brand that ABB is proud to be associated with. It unites the industry and helps the supply chain to win business worldwide.”

He added: “We view EIC first and foremost as one of the strongest sources of market and business intelligence for the global energy industries. The tool we use most, with hundreds of subscribers globally, is EIC’s daily updated EICDataStream energy project database, covering all energy sectors and countries.”