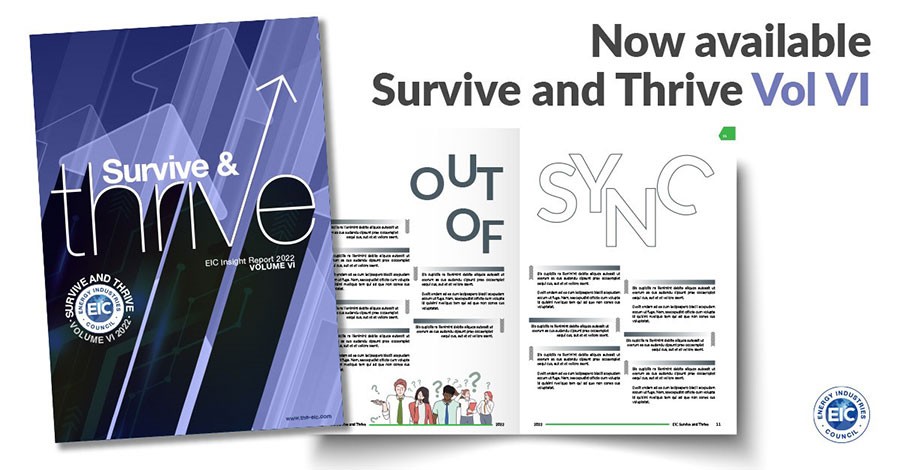 Innovation is at the centre of attention in the energy industry for 2022, according to dozens of CEOs and senior executives of energy companies across the supply chain and in sectors ranging from oil and gas to power and renewables.

This is a key takeaway from the sixth Survive and Thrive report, produced by the Energy Industries Council (EIC) to reflect on challenges and opportunities the energy industry faces every year.

Just a few years ago—when the energy industry was concerned with diversification, transition, and efficiency—no one could have foreseen that energy companies would turn again to the longer-term investment in innovative solutions. But this change comes with a twist; unlike previous years, much of the innovation in 2022 is going to oil and gas.

The return to oil and gas investments across the supply chain is largely down to sustained higher oil and gas prices, but also more recently by tightening supplies initially brought by supply chain disruptions during Covid-19 and then made much worse by the Russian invasion of Ukraine.

No doubt, a combination of a sudden preoccupation with energy security (in a manner perhaps not too dissimilar to that of the early 1970s energy crisis) and massive spikes of oil and gas prices created the right conditions for innovation in the oil and gas industry.

EIC data, based on interviews with 63 energy executives, show that 51 percent of energy companies are placing innovation high on their 2022 agenda. That is up from 36 percent in the previous year.

Close to 70 percent of the companies innovating are doing so in the oil and gas sector. While innovation has grown year and year, it is still below the peak of 73 percent that we saw in 2017.  But this drive toward innovation and the energy industry’s appetite for more investment is not without hurdles.

A key issue in this regard is that the oil and gas industry is largely cut off from UK and devolved government support. This is especially the case for exports. To make matters worse, the industry is also faced with an unfavourable public opinion, pushing for acceleration of climate action, including cutting reliance on fossil fuels.

Of course, the oil and gas industry is not blind to the need to reduce its environmental footprint through utilisation of net zero technologies such as hydrogen and carbon capture, and filling their power needs from clean power sources.

Equinor’s Hywind Tampen floating wind farm, set to provide electricity for the Snorre and Gullfaks oil and gas fields in the North Sea, is an example of such efforts.

The energy security situation we are faced with was in no one’s mind when the net zero targets were set. That is a fact. We have seen that governments in Europe are backing oil and gas again, and even coal-fired power generation in some cases —who could have predicted this just six months after COP26.

While no one expects governments to make a U-turn on certain policies that have been designed in the first place to protect the environment and our future generations, it makes sense that a more nuanced and, indeed, practical approach should be taken toward providing support for the oil and gas industry, especially when it comes to exports. This will mean assessing a ‘fit for investment’ process beyond oil and gas. We need to be clear about what we will and won’t support and how the link to those companies still with majority work in oil and gas can achieve funding to progress.

Countries around the world need the support and expertise of innovative supply chain energy companies that can help them achieve energy security efficiently and with the lowest carbon emissions possible. Increasingly of course, much more energy projects are clean or renewable. But gas is also an important part of both energy security and the transitional period. A secure supply of gas also means that energy is more affordable.

In all fairness though, we cannot only look to government policies for lacklustre exports in the energy industry’s supply chain businesses. Our survey of energy executives reveals, for the sixth consecutive year, that the development of new overseas markets remains the hardest and least attractive growth strategy for companies. Our data show that only 13 percent of energy supply chain companies incorporated exports as part of their growth strategy in 2022, down from 15 percent in the previous year.

While we always push for more inclusive government policy and action to encourage exports, we also believe that businesses need to take a much more proactive approach. We at the EIC, as a representative of companies across the energy industry’s supply chain, are asking to remove the anti-competitive nature of funding by working with the funding agencies to reflect the changing nature of the energy landscape with the focus on energy security. This will also mean increasing the number of exporting companies. Indeed, the EIC will be engaging with governments to take this issue forward.

But government policies and practices are not helping in some areas. Meeting our net zero target, as industry leaders unanimously agree, requires acting immediately. Indeed, executives interviewed for Survive and Thrive are starting to doubt whether governments around the world can meet their net zero commitments.

In fact, EIC members have been discussing this long before the Climate Change Committee produced its warning that the UK’s ambition of making zero carbon emissions by 2050 could be in jeopardy due to lack of public spending on insulating homes, among other environmental challenges.

From an energy industry’s standpoint, there are numerous reasons contributing to this serious concern. One is a disconcerting lack of capacity across the supply chain to deliver on global pledges to net zero. There is also an issue of time and delays. For example, it takes UK offshore wind projects 10 years to get from concept to commissioning. That’s too long, too inefficient. The planning process needs to be more transparent; we need to start having a grown-up conversation around what can be done to speed up the process.

That’s why it’s vital for clean and renewable energy projects to be deployed en masse at an increasingly rate and it’s time to take radical action to slash project completion times. It’s only by taking immediate action of this kind that net zero targets can be met and the supply chain can be maintained.