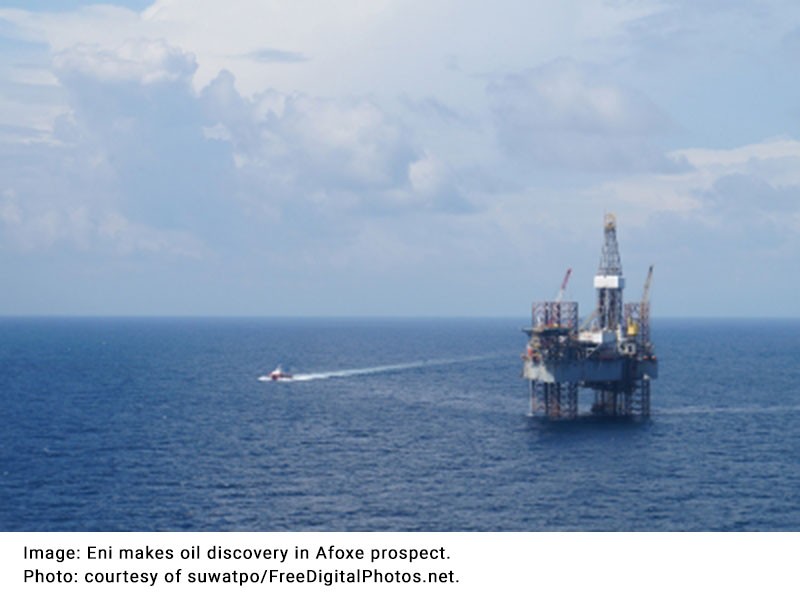 Italian oil and gas major Eni has reported a new oil discovery in the Afoxe prospect in Block 15/06, located offshore Angola following the drilling of the Afoxe-1 NFW well.

According to Eni, the discovery at the Afoxe prospect is estimated to hold 170-200 million barrels of light oil in place.

The Afoxe-1 NFW well, which was drilled a total depth of 1,723m in a water depth of 780m, intersected 20m net oil pay. The Italian firm, which is the operator of Block 15/06, said that the discovery is of high quality oil (37° API) contained in Upper Miocene sandstones having excellent petrophysical properties.

Although the well is yet to be tested, the company said that it had carried out intensive data collection which indicates a production capacity of more than 5,000 barrels of oil per day.

The Afoxe discovery is located in the south-east area of Block 15/06, about 120km off the coast, 20km west of the Kalimba-1 discovery made in June 2018, and 50km south-west from the Olombendo FPSO.

Eni said that the Kalimba and Afoxe discoveries, put together, have a potential of 400-500mboe of high quality oil in place. The oil and gas giant believes that the two discoveries represent a new cluster that can be jointly exploited through a new development concept.

Eni said that the Afoxe discovery confirms further that there is still potential for oil exploration in southern part of Block 15/06, which in the past was mainly considered to be gas prone. The Italian oil and gas company revealed its plans to drill up to four new exploration wells in succession in the offshore Angolan block in 2019.

Eni CEO Claudio Descalzi said: “Eni is committed to developing this discovery leveraging its best-in-class time-to-market, whilst at the same time launching an intense exploration campaign that will fully support the Company’s mid-term organic growth in the Country.”