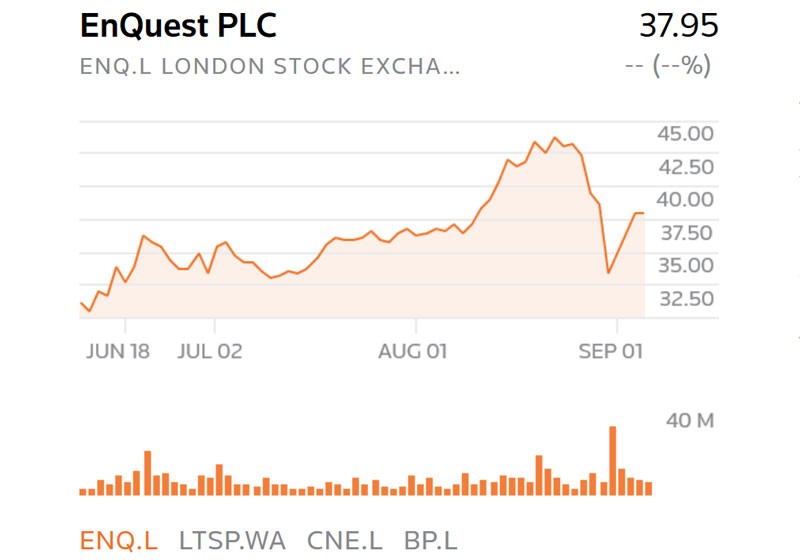 EnQuest switched from plans to sell a stake in its flagship North Sea oilfield to borrowing money against it after two sets of sale talks had to be abandoned as a deadline for a debt repayment approached, industry and banking sources said.

EnQuest, with almost $2 billion (1.53 billion pounds) in debt, launched earlier this year the sale of a 20 percent stake in the heavy oil Kraken field, one of the largest North Sea developments which started production in June last year.

The sale of the stake would have pumped welcome cash into the coffers of the company which has to pay back just under $200 million in debt in October.

The sale process, initially expected to raise up to $400 million, was run by investment bank Jefferies.

London-based EnQuest received an offer for a stake in Kraken from Lotos (LTSP.WA), a Polish state-backed oil and gas company, several months ago, according to the sources.

The talks reached advanced stages, but dragged on and could not be concluded in time, according to one source.

A second offer from a private company was rejected by EnQuest after the bidder revised its terms at the last minute, the sources said.

After the two failed approaches, EnQuest decided to borrow $175 million against 15 percent of Kraken’s cashflow from Oz Management to be paid back within five years.

The move came as the company is saddled with net debt which stood at $1.97 billion at the end of June. Its market value is around $564 million.

“There was very significant interest in the farm-out process for Kraken and we received a number of offers from both industry participants and financial institutions,” EnQuest said in a statement to Reuters.

“The financing agreement with Oz Management was selected as the preferred economic option for EnQuest at this time, allowing us to retain significant exposure to the upside potential on Kraken.”

EnQuest, which specialises in squeezing more barrels out of ageing fields, holds 70.5 percent of the Kraken field while Cairn Energy owns the rest.

Oil production from Kraken averaged 31,000 barrels per day (bpd) in the first six months of 2018, slightly below expectations due to issues with water injection to increase oil recovery and bad weather.

EnQuest shares tumbled around 13 percent on Friday after the company announced a discounted share issue to buy the remaining 75 percent in the Magnus oilfield from BP (BP.L) to shore up future output.

“The concern with Enquest’s equity value remains its sensitivity to $1.97 billion of net debt ... we cannot rule out future approaches to the market,” Jefferies said in a note on Monday.