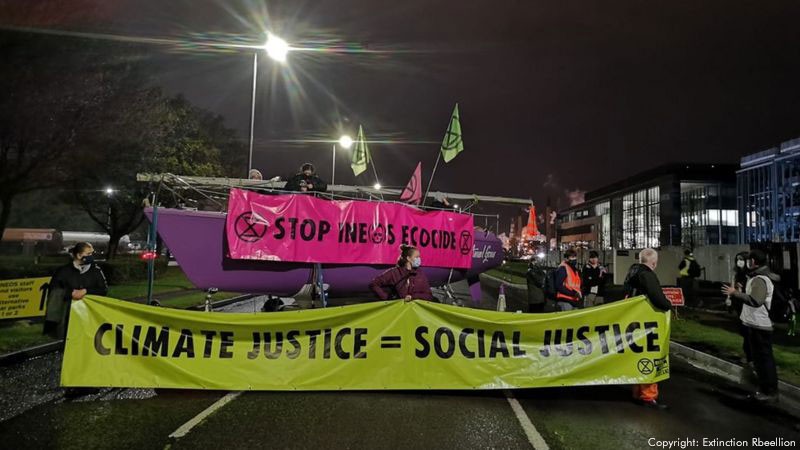 Climate change activists are staging a protest outside the Grangemouth oil refinery.

Demonstrators from Extinction Rebellion are attempting to prevent access to the Ineos plant and have blocked two roads with boats. The group said protesters had also locked themselves together.

The group has accused the petrochemical manufacturer of being Scotland's biggest climate change polluter.

Ineos said it would continue to explore ways to reduce emissions at its sites.

Protesters are also demonstrating outside the company's London headquarters.

An Extinction Rebellion statement said it had blocked the Bo'ness Road gate with a boat and that another boat was located at the Ineos office on Inchyra Road.

Extinction Rebellion Scotland said Covid-19 safety precautions were being taken, including face masks, social distancing and use of hand sanitiser, while participating activists were using a track and trace app.

Annie Lane, 26, a campaigner from Glasgow, said: "We are here to expose the climate destruction that Ineos is causing. We are running out of time, with the climate crisis affecting so many in the global south already."

Ineos said that between 2009 and 2019, emissions from its Grangemouth site had reduced by 37% and emissions from the chemicals business had fallen by 43%.

A spokesman said the company's sites were exploring ways to reduce emissions.

He added: "As more and more energy-intensive manufacturing industries in Scotland close down, then it is inevitable that those which the Scottish economy so heavily rely on will stand out above the rest in terms of their emissions.

"Observers should be left in no doubt: manufacturing products in the UK we rely on every day, every week, every year reduces carbon footprint from importing such items, ensures compliance with the strictest environmental and safety standards and delivers carbon savings through their applications, 'light-weighting' vehicles, components for wind turbines and so on.

"We do our utmost to do this as efficiently (and environmentally responsibly) as possible - because this is how we will remain in business."

A Police Scotland spokesman said: "Officers are currently in attendance at a peaceful protest in Bo'ness Road and Inchyra Road, Grangemouth.

"The roads are blocked and drivers are asked to avoid the area. We are liaising with the protest organisers, Extinction Rebellion."