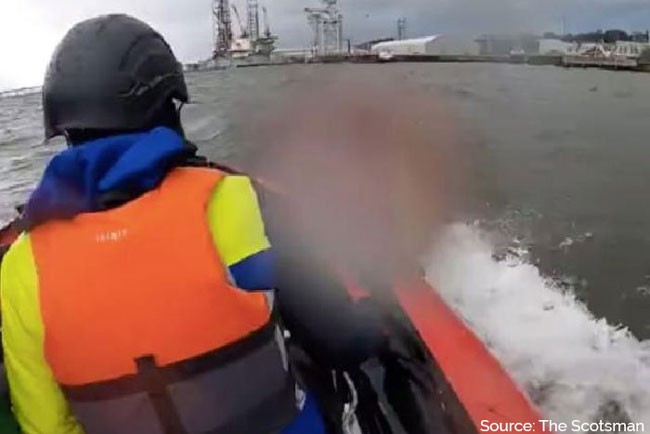 Extinction Rebellion Scotland activists have boarded a Shell gas rig currently parked in Dundee Harbour, which is destined for the North Sea.

They have scaled the towers and intend to stay up there for as long as possible to stop the rig leaving the harbour, and to halt the rig's operations.

Jo, 34, a gardener from Edinburgh said: "I am doing this for my niece Ivy, who is an incredible little human. I don’t want to say to her that I didn’t take a stand when I had the choice and left it to other people to sort it out. I am going to give it my best shot and go down fighting, because I can see the world through her eyes and I want to protect things for her."

Fiona, 23 from the Highlands said: "We cannot decarbonise while continuing to extract and burn North Sea Oil and Gas. The 5.7 billion barrels currently available in our operating oil and gas fields give us zero chance of staying below 'safe' 2C warming. We are currently living in a world warmed by 1.1 C - and we are seeing the catastrophic, heartbreaking and devastating effects everyday. Yet we see vague targets set far in the future, and nothing concrete being done in the short term. The estimated oil and gas currently remaining in the North Sea is close to 20 billion barrels of oil. The industry, the Scottish and UK Governments are committed to extracting every last drop before 2050. If we do this, as 'world leaders of tackling climate change' (as the Scottish and UK Governments proclaim), we will be the Pied Piper's of certain catastrophe."

Alison, 28 from Dundee said: "Shell is not an asset to our economy. They avoided paying corporate income tax in the UK in 2018 despite generating pretax profits of 731 million dollars. They pay their CEO 143 times what the average worker receives. And they receive massive amounts of money in subsidies from the UK and Scottish Government. Worldwide, the fossil fuel industry receives five trillion dollars of subsidies a year. That's $10 million a minute according to the International Monetary Fund."

Mark, 21 from Aberdeen said: "Thousands of people have worked tirelessly in this often dangerous industry to keep the lights on and we thank them for their service. They cannot be left behind. We need everyone to move towards a greener future - and we have the capability to in Scotland."

Marco, 23 from Edinburgh said: "History has shown us that extractive industries like mining or fossil fuel extraction these corporations that run these industries have historically shown very little care for the communities in which they operate. When global commodity prices go down and the mines have to close, jobs disappear and communities are left behind. systematically. That is pretty much the story in every country in the world. They are not good employers. every time the oil prices go down, wages drop jobs are lost people are not protected."