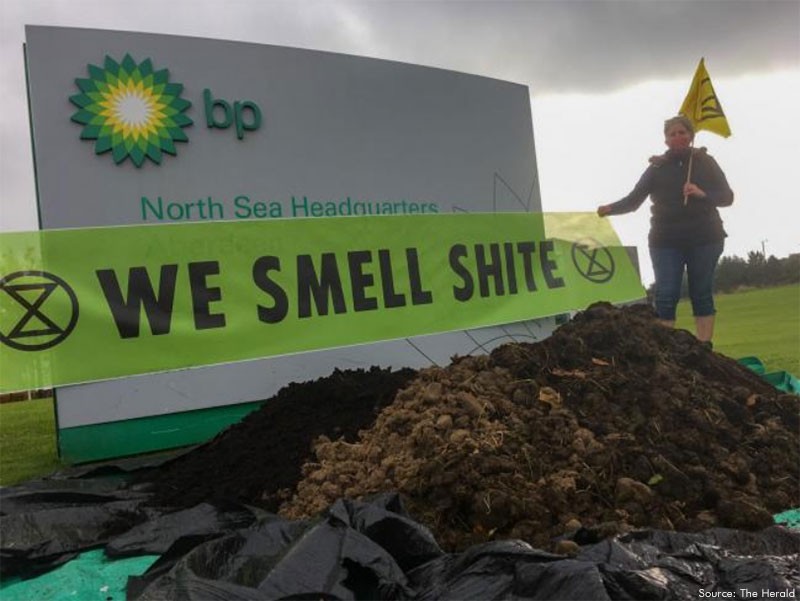 The protest marks the third week of non-violent direct action campaign 'Make The Connections' to highlight the threat of climate change across Scotland and "putting profit before people."

And in today's bid to remind "local government, national government and the public" of the "threat" posed by BP, activists dumped mounds of manure outside its offices in Dyce, Aberdeen at midday today.

Last month, BP partnered with Aberdeen City Council to "decarbonise the city", when the oil firm signed a deal with council leaders as part of efforts to cut emissions and help it become a “climate-positive city”.

As part of the deal, BP will serve as a planning and technical adviser in the delivery of the local authority’s Energy Transition Strategic Infrastructure Plan.

The company and the local authority will also explore opportunities for using hydrogen power for transport and heating, while work will take place to increase the fuel efficiency of the council’s fleets of vehicles.

Aberdeen City Council co-leader Jenny Laing said the local authority is “delighted” to be working with BP on “the next phase of Aberdeen’s drive to support local, national and international climate change targets”.

She said: “The council and BP have the same goals in reducing our carbon footprint and working with BP provides a major opportunity for Aberdeen to progress our plans.

“Our operations include areas such as transport, district heating, buildings and waste, while BP is a world leader in energy and has a significant innovation and R&D base for us to draw on and learn from.”

Fellow council co-leader Douglas Lumsden said: “We are facing unprecedented economic challenges and, at the same time, must respond to climate change.

“We are implementing a major transformation programme in response to this and today’s announcement is an indication of the confidence in Aberdeen that major businesses have.

“The relationship will consolidate the city’s position on the international stage.

“It aligns to the work of the World Energy Cities Partnership and it is a reflection of Aberdeen’s global reputation that along with Houston we are the first two cities that BP is working with as part of its commitment to support decarbonisation in cities.”

But Mel Evans, senior climate campaigner for Greenpeace UK, said: “Aberdeen is the heart of the UK’s oil and gas industry and a complete shift to clean energy is what’s needed across the UK to tackle the climate emergency.

“This must go beyond the way that the city of Aberdeen uses energy.

“We need to see BP actually building renewable energy – especially new offshore wind capacity in the North Sea, not just buying up existing wind infrastructure from another company to rebalance BP’s own portfolio.

“Oil and gas workers and communities must be listened to and supported into secure and sustainable jobs in clean energy.”

WWF Scotland’s head of policy Fabrice Leveque said: “Given the role BP has played in driving global climate chaos over the years, it’s only right that it now takes action to help places like Aberdeen transition rapidly to a future that is no longer reliant on fossil fuels.

“However, just like BP’s own recent commitments to cut oil and gas production, the proof will be what gets delivered on the ground though this partnership.”

Extinction Rebellion activists are now demanding that governments "publicly acknowledge" that oil companies "cannot be trusted to deliver a just and green transition" and that BP be "excluded from climate talks" and have all funding or subsidies "halted and redirected" to provide training in new fields for Scotland's oil and gas workforce.

"You wouldn’t trust a tobacco company to provide cancer care, so why are our political representatives allowing the least trustworthy company to muscle in on the most pressing issue of our time?"

A BP spokesperson said: “We arrived at our net zero ambition and strategy through constructive dialogue with a wide range of stakeholders, including many challenging voices – this was driven by dialogue, not by stunts.

“Our strategy is clear - by the end of the decade we aim to have developed ‎around 50 gigawatts of net renewable generating capacity – a 20-fold increase. We also aim increase our annual low carbon investment 10-fold to around $5 billion and we plan to cut our oil ‎and gas production by 40%.

“Many climate leaders have welcomed this strategic pivot from International Oil Company to Integrated Energy Company, but we recognize that some remain sceptical and that we must demonstrate through our transformation that we are on target for net zero by 2050 or sooner.”