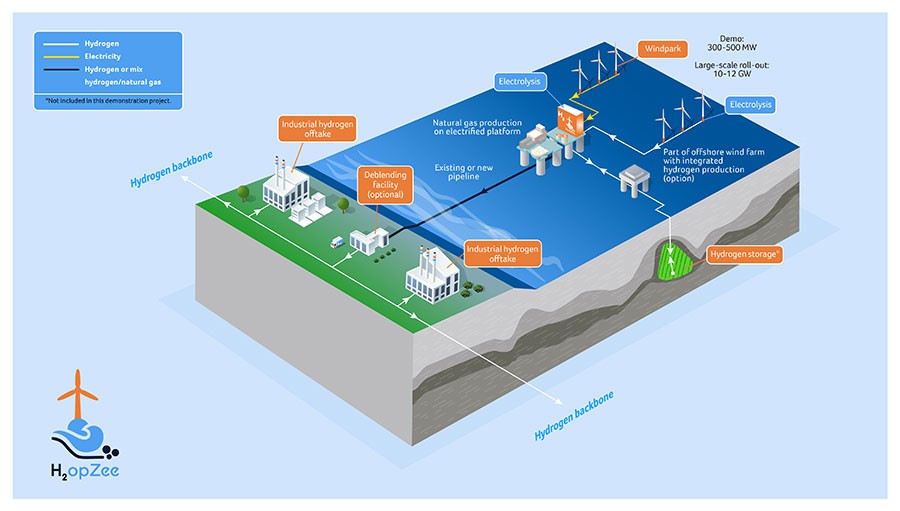 The H2opZee project was announced in February this year and the consortium continues to progress its development plans. A joint feasibility study began in June 2022, which is planned to run until the beginning of summer 2023. The study forms part of the first phase of H2opZee in which various technical concepts and potential development locations are being evaluated in order to assess the optimal solution to generate green hydrogen offshore. Transportation to shore of this green hydrogen will be via pipeline. In the second phase, the project will be implemented. For that phase, a tender methodology has yet to be defined.

The remainder of the technical work will be supported by in-house engineering by RWE and Neptune Energy. The consortium is also working closely with offshore infrastructure owners to evaluate various export options via the existing pipeline network to shore.

The new contracts are effective as of August 2022.

Neptune Energy’s Managing Director in the Netherlands, Lex de Groot, said: “Following the very successful roll-out of wind farms producing green electricity in the Dutch North Sea, offshore green hydrogen is the next step in the energy transition and crucial for our domestic future energy supply.

“It can be produced right here in the North Sea, giving the Netherlands a leading role in providing green energy to North Western Europe, reducing the need for imports. By re-using existing gas infrastructure, the energy transition can be faster, cheaper and cleaner. This infrastructure is technically suitable and already in place, including landing and possible international connections with other countries, such as Norway, Denmark, Germany and the UK.

“Lessons learned through Neptune’s support for the PosHYdon offshore hydrogen pilot will be applied to H₂opZee. The faster we can scale up green hydrogen at sea, the faster industries such as chemical and steel production can become more sustainable. With H₂opZee, the Netherlands is becoming a world leader in this area. That is why we, together with RWE, are excited about H₂opZee and what it has to offer the Netherlands.”

Sven Utermöhlen, CEO Offshore Wind at RWE Renewables, said: "It’s good that we are taking the next step with the H₂opZee consortium to advance the project. Large-scale production of green hydrogen based on offshore wind is a key solution to decarbonising the industry.

“A demonstration project such as H₂opZee helps us to better understand how this could be put into practice. Thanks to our cooperation with partners such as Neptune Energy, Siemens Gamesa, H2SEA and Enersea, we are getting closer to achieving the Dutch climate goals."