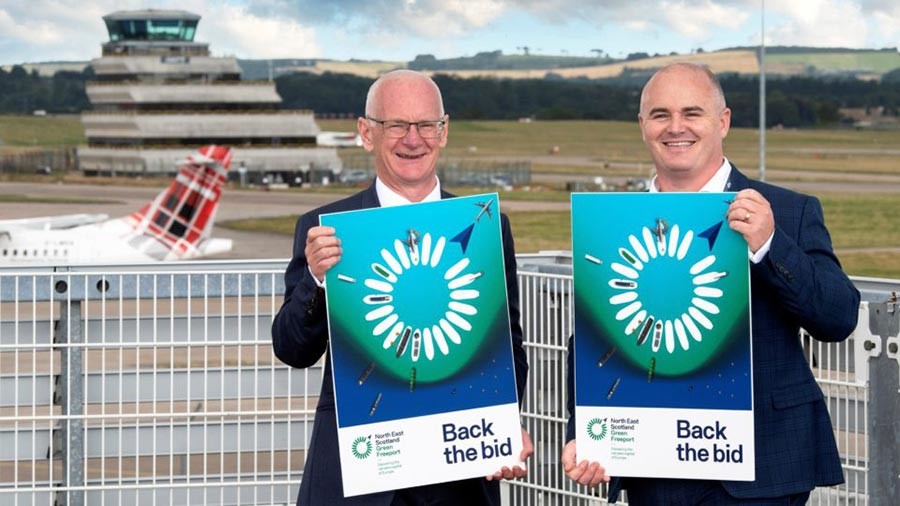 A Green Freeport in the North-east of Scotland could play a significant role in decarbonising the aviation industry by delivering a sustainable aviation fuel (SAF) plant that would create up to 920 jobs and £133million in GVA per year.

The creation of a SAF facility at St Fergus is a key part of the North East Scotland Green Freeport bid which has a wider focus on investing in sustainable fuels to support the UK’s Decarbonising Transport strategy.

Driving a domestic SAF sector with the North East Scotland Green Freeport would put the UK at the forefront of world leading aviation climate solutions. It would create thousands of clean growth jobs and provide a significant UK export opportunity as aviation decarbonises globally.

“The SAF production facility at St Fergus is a key part of the region’s bid for green freeport status. It was identified based on the availability of feedstock required to produce SAF and the enabling carbon capture usage and storage (CCUS) infrastructure.

“Securing green freeport status would not only unlock the potential of this SAF plant it would help retain and create jobs at St Fergus which is actively seeking a just transition of workers to clean growth jobs.”

“Becoming a Green Freeport is an important element of the collective Scottish and UK effort to reach net zero, connecting Acorn’s CO2 capture and permanent geological storage to emitters in central Scotland, English Freeports such as Thames and Solent, as well as international customers. As each day passes, the climate crisis worsens. It is vital we push hard to get important carbon reduction developments like Acorn online as swiftly as possible.

“Green Freeport status would strengthen the region’s capabilities of delivering this target and help establish Aberdeen as a global leader in the energy transition.”

“The proposed SAF facility at St. Fergus is a strong example of Aberdeenshire’s potential to harness natural resources for the creation of sustainable fuel alternatives.

“Not only is this a positive step towards decarbonising the region, but the site would also create hundreds of green jobs and accelerate the just transition of our workforce. This is an exciting venture and we will continue to work closely with partners on its delivery.”

A North East Scotland Green Freeport is key to unlocking the SAF potential in the region.

It comes as more than 100 senior business leaders and cross section of politicians recently signed a statement in support of the North East Scotland Green Freeport bid which will create 32,000 high-quality jobs and boost GVA by £8.5billion over the next decade.

The use of SAF does not require new technology for aircraft or the need for airports such as Aberdeen, to invest in new facilities. Almost 500,000 flights around the world have already flown on SAF.

Around 73% of aviation emissions come from medium and long-haul flights which will still need liquid fuel in 2050, meaning SAF is a key, long-term solution to the UK aviation industry’s jet zero commitment.

Further information about how to back the North East Scotland Green Freeport bid can be found at www.northeastscotlandgreenfreeport.com.