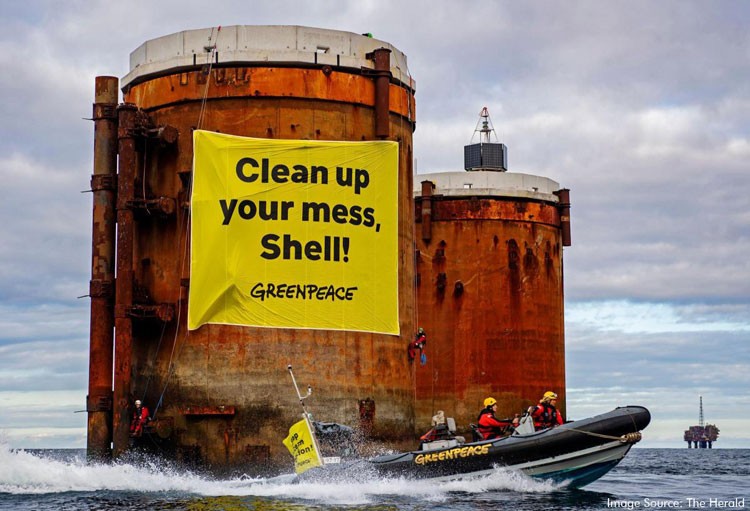 North Sea oil decommissioning: pressure grows on Shell to back down

They are the giants of the deep which spent more than four decades pumping billions of pounds worth of oil from the seabed.

But now decommissioned rigs in the North Sea are at the centre of an environmental storm with an oil giant under intense pressure to rethink plans to leave some of the platforms in the sea.

Several hundred oil drilling platforms in the waters off Scotland are due to be decommissioned over the next three decades as they approach the end of their operational lifetime.

Due to the cost and difficulty of dismantling the structures – each of which can be as tall as the Eiffel Tower – Shell proposed removing only the topside of its four Brent platforms, leaving the huge concrete legs in place.

That resulted in the controversial suggestion that oil mixed with sediment in 42 out of 64 concrete storage cells – each up to 66 feet in diameter and 200 feet high, around the height of the Scott Monument in Edinburgh – should remain on the seabed. These could remain for up to 500 years after the platforms have been decommissioned.

The plans have raised alarm in some quarters over the impact of leaks from the estimated 11,000 tonnes of raw oil and toxins remaining in the base of the four Brent installations – Alpha, Bravo, Charlie and Delta, all put up in the East Shetland basin in the 1970s.

It has emerged that a report of an expert evaluation group commissioned by the Dutch government has provided a critical analysis of the position and recommends a clean-up be carried out as agreed more than 20 years ago in international treaties.

The special treaty known as Ospar, which was adopted in 1992, states that rigs, including their contents and pipelines, must be removed from the sea after decommissioning.

The experts said that removing all contaminated materials “presents the most certain solution”.

They say staying true to Ospar “not only avoids passing on potential problems to future generations” but also prevents “large amounts of negative public attention as was the case in the decommissioning of Brent Spar in the 1990s”.

When Shell proposed sinking the Spar oil storage buoy in 1995, it prompted protests by Greenpeace, petrol boycotts in Germany and a falling share price. The company was eventually forced to back down and find a more environmentally friendly plan.

Last Monday, Greenpeace activists from the Netherlands, Germany and Denmark boarded two oil platforms in Shell’s Brent field in a protest against the plans.

The new report revealed that an earlier independent review group said that a “leave in place” solution with appropriate navigational markers and safety zones gave “a risk in relation to shipping impact that Shell regarded as acceptable”.

The report added: “However, although the estimated probabilities of a collision may be low on a per annum basis, the consequences could be catastrophic and result in major injury and loss of life or serious marine pollution.”

Dutch infrastructure minister Cora van Nieuwenhuizen has said in a letter that the Netherlands will object to the proposals, saying it has not been proved that leaving the platform foundations was the best option from an environmental or safety point of view, and has called on the UK Government to conduct further research.

It has been confirmed that the UK Government is to hold talks about the plans after Germany and the Netherlands issued a formal complaint over its support for Shell’s proposal.

Scottish Liberal Democrat MEP Sheila Ritchie has written to the UK Minister for Business, Energy and Clean Growth to raise worries that the plans fail to properly take into account the long-term risks to the environment and increased threat of maritime accidents.

Ritchie said: “Failing to decommission oil structures appropriately means thousands of tonnes of hazardous waste, including crude oil, could remain in place for up to 500 years after the platforms have been decommissioned.

“Ministers have been warned that Shell’s plans failed to properly take into account the long-term risks to the environment and increased threat of ship traffic maritime accidents.

“Proper decommissioning of oil rigs in the North Sea would mitigate threats to our environment and risks to maritime shipping while developing the expertise required as we move away from fossil fuels, providing the northeast of Scotland with a growth industry.”

The development comes two months after millions of pounds of extra funding was announced to help maximise the economic benefit to Scotland from the decommissioning of North Sea oil and gas infrastructure. Scottish ministers said an additional £4 million had been made available

It comes after £10m was committed in the first three rounds of the fund, pumping money into locations including Shetland, Kishorn, Aberdeen, Dundee, Leith and Hunterston.

In the 2018 Budget, Chancellor Philip Hammond announced a call for evidence on plans to make Scotland a global hub for decommissioning. The UK Government argued Scotland will “pioneer the future of the global oil and gas industry”, with the North Sea representing “one of the first regions in the world to start decommissioning on such a large scale” .

In January 2019, the German environment minister Svenja Schulze wrote to the then Environment Secretary, Michael Gove, to express concerns over the Shell decommissioning plans.

She wrote: “I am concerned to find there are no plans for disposal on land despite the fact that technical possibilities are available.”

The letter reportedly added the German environment ministry met with Shell on two occasions to raise their concerns, and also asked for the decision to be reviewed.

There is concern that if the UK Government agrees to the Shell proposals it may undermine an international convention designed to protect the marine environment.

The first major decommissioning project in the North Sea was completed in 2017 with the removal of platform Brent Delta from its legs.

In June, Shell removed a second platform from its Brent field in the North Sea, Brent Bravo, which was taken to Hartlepool for recycling.

But the concrete legs of the structure were left in position with claims they could act as artificial reefs to help marine life.

A Scottish Government spokesman said:“We have been working for some time with our enterprise agencies, industry and upstream operators to develop an action plan and Decommissioning Challenge Fund to help ensure that the Scottish supply chain captures the maximum possible economic opportunities from decommissioning.

“Our efforts are directed to ensuring decommissioning is carried out to the highest safety and environmental standards, minimising the risk to the environment and other users of the sea.

“Scotland’s oil and gas supply chain is particularly active in high value, well plugging and abandonment stages of decommissioning, but is increasingly looking to engage in removal and salvage operations too.”

A Shell spokesman said: “Shell looks forward to continuing discussions with partners and other organisations about its plans for decommissioning structures in the Brent field, as part of a regulatory process managed by governments.

“After a decade of in-depth research scrutinised by independent scientists, and extensive consultation with experts and NGOs, we are confident that our plans are safe, environmentally sound, technically achievable, and socially responsible.”