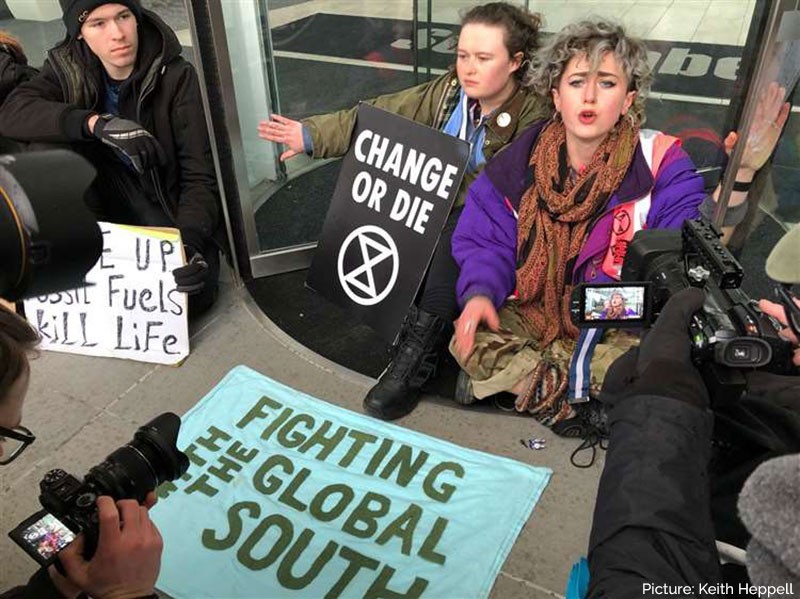 Extinction Rebellion's week-long protest highlighting incoming climate change issues - which rocked the nation yesterday when the lawn around the Newton Apple Tree at Trinity College was dug over - continues today with a blockade of the Schlumberger site on Madingley Road “to highlight university’s connection to fossil fuels”.

“It's a company that we want to disrupt,” said one XR protester of the oilfield services company as he prepared to begin the blockade, which resulted in one protester being led away by police (see video).

Among the group’s demands is that "the university provides training and resources for the fossil fuel industry through the Schlumberger Cambridge International Scholarship". The University also maintains a Schlumberger Professorship of Complex Physical Systems.

Schlumberger operates in over 85 countries, researching new technologies at centres such as the unit in Cambridge. It develops methods to extract fossil fuels through Arctic exploration, deep-sea drilling, fracking and "re-fracking". The company - headquartered in Houston, Texas - has developed 35,000 patented technologies to profit from the extraction of fossil fuels. Schlumberger claims that it is committed to "conducting business in a manner that preserves and respects human dignity" and that they have a "long-standing culture of global social and environmental stewardship". Extinction Rebellion Cambridge says that evidence contradicts this, citing NGO reports which detail discrimination, sexual harassment and illegal contract termination. The protesters also point to the destruction casued by the laying of oil and gas pipelines which has repeatedly led to the displacement of indigenous communities all over the world, including the Wet'suwet'en people in British Columbia, Canada.

"It’s time for the University to ditch its support for an industry that is destroying the planet and killing some of the most vulnerable people in the world," said Annie Rose of Extinction Rebellion Cambridge Youth. "The University is doing some great research but scholarships and professorships for companies like Schlumberger allow planetary destruction to continue.

“We have a message for Schlumberger too – if you really care about environmental stewardship, as you say you do, prove it. Stop all research into fossil fuel extraction today. Moving all your investments into renewable energies and help provide a just transition into the renewable energy for all of your workers. Restore the livelihoods of the people in places where your operations have destroyed nature and communities."

The protest at Schlumberger is part of this week's ongoing Extinction Rebellion Cambridge’s youth-led Rebel for Justice campaign. In January, Extinction Rebellion’s local youth wing, XR Youth Cambridge, issued an ultimatum to the city council, county council and Cambridge University, stating that XR would create major disruption if the institutions did not agree to its three demands concerning climate and social justice. Today’s protest was part of a series of “satellite actions” during Rebel for Justice, which centres on a week-long roadblock on Trumpington Road.

The Schlumberger action is part of the week's activities which hit the headlines yesterday, and have since led to the arrest of an unnamed 19-year-old woman. Extinction Rebellion was unapologetic.

"It has been polarising," said an XR spokesperson. "Sometimes the public come up to thank us, others say we've gone too far and see it as vandalism but Trinity College didn't want the sale of Innocence Farm to be on the national news so ity was always going to be controversial. It highlights issues onj land equality as well as climate change."

Cambridge Police defended their strategy on a Facebook post, saying "simply a road being blocked does not make a protest unlawful".

Expect more XR "supplementary action" around the city during the week, starting with a Critical Mass bicycle ride-out this afternoon (5.45pm , Parker's Piece) and including a family action with activities for children at the makeshift camp inside the roadblock tomorrow.