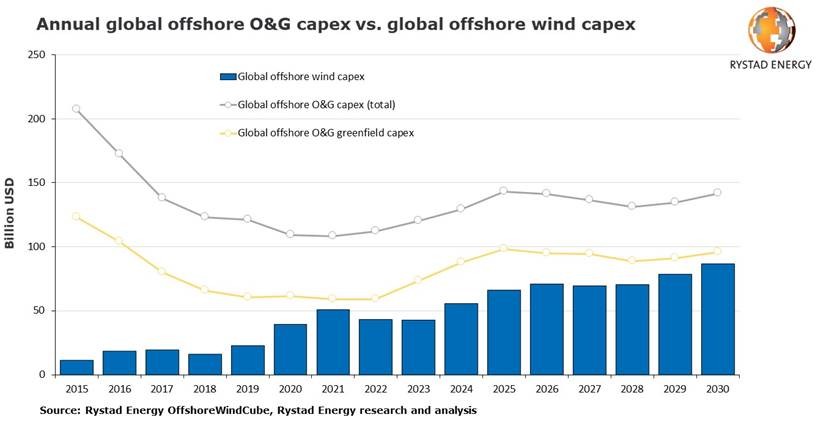 Offshore wind spending is closing the gap against O&G, will exceed it in more regions by 2030

Offshore wind spending is increasingly closing the gap on oil and gas (O&G) investments and is forecast to surpass them in several key markets by 2030, Rystad Energy analysis indicates. While global O&G capital expenditure will rise nominally in this timeframe, anticipated growth in offshore wind investments will bring Europe, the United States and Asia (excluding China) to the tipping point before the end of the decade.

Although we expect global offshore O&G expenditure to increase marginally to more than $140 billion by 2030, the rapidly growing offshore wind sector is forecast to reach a market size of $87 billion over the same period – a 70% increase compared with 2021's market value of $50 billion. Furthermore, estimates show that less than $10 billion will separate offshore greenfield capex for O&G and offshore wind investments by 2030.

Of the countries and regions analyzed by Rystad Energy, the US offshore wind sector is expected to see the fastest growth in investment, albeit from very low levels in 2020. At the same time, offshore wind activity is surging in China, but the country will see investments decline towards 2030 as feed-in-tariffs (FiTs) phase out from 2022 onwards. Nevertheless, significant ongoing investment is expected to make China the world’s largest offshore wind market, with 58 GW of installed capacity in 2030.

“To remain relevant in a changing market, offshore service companies will need to monitor this trend closely as they draft long-term strategies that position them for a smooth transition into offshore wind, enabling them to take advantage of what promises to be a major growth industry,” says Alexander Dobrowen Fløtre, offshore wind expert and Vice President at Rystad Energy.

The offshore wind industry in Asia (excluding China) is still in its infancy, but capacity is expected to see rapid growth during the decade. In the short-to-medium term, intertidal (near-shore, shallow-water) wind farms in Vietnam and conventional offshore wind in Taiwan are expected to drive capital investment towards 2025. We expect mainly Japan and South Korea to add to sectoral growth in the second half of the decade. With declining offshore O&G investments, the crossing point is expected to occur in 2028.

China’s limited, shallow-water offshore O&G sector has seen flat investment levels of around $5 billion annually. At the same time, offshore wind investments have grown rapidly since 2015, thanks in part to supportive policies. As a result, China experienced its crossing point in 2017. Although offshore wind activity is likely to slow once current investments tail off, the sector is expected to remain larger than offshore O&G throughout this decade.

Denmark has had limited offshore O&G activity and was one of the early movers in the offshore wind sector. Despite this, it currently ranks only fourth in Europe in terms of operational capacity, with 2.3 GW, as many of its early wind farms were relatively small. The two industries have trailed each other in recent years, but it will not be until 2022 that investment in offshore wind is expected to surpass offshore O&G in Denmark. This follows the nation’s current tendering activity and ambitious plans for large-scale energy islands with long-term targets of more than 10 GW of additional offshore wind capacity.

The US, meanwhile, has seen declining O&G investment levels, with capex levels expected to fall below $10 billion from 2023 onwards. At the same time, the Biden administration has set an ambitious federal offshore wind target of 30 GW by 2030. While Rystad Energy expects the US to fall short of its declared target, our forecast of 21 GW by 2030 will still entail rapidly increasing investments to between $8 billion and $10 billion from 2025 to 2030. Although offshore wind investment is expected to fall below that of offshore O&G in 2030, following a slight recovery in the latter sector, offshore wind in the US will again see larger capex levels than O&G after 2030, as upstream investment tails off.