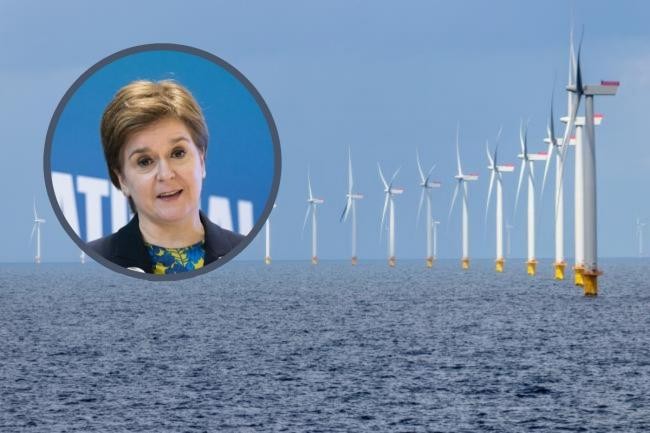 Nicola Sturgeon has labelled 17 wind power projects that will generate 25GW of renewable energy and tally up £700m of public funding a “truly historic” opportunity to transform Scotland into a net zero economy – insisting that North Sea oil and gas workers “can be confident of opportunities for their future”.

The successful wind projects will be offered the rights to specific areas of the seabed for the development of offshore wind power - with developers committing to invest in the Scottish supply chain, providing opportunities for high quality green jobs for decades to come.

The Scottish Government has previously been criticised over a failure to ensure jobs and investment for offshore wind projects stay in Scotland.

The 17 projects are expected to secure at least £1 billion in supply chain investment for every 1GW of proposed power and will also generate around £700 million in revenue for the Scottish Government.

Chris Stark, the chief exective of the Climate Change Committee, welcomed the 25GW capacity in the new contracts which he said was "much higher than many expected".

Mr Stark pointed to more than half of the capacity being allocated to floating wind, adding that the move "will really build confidence".

BP has been awarded a fixed offshore development with a capacity of almost 3GW – costing the company almost £86 million while SSE has been handed a floating project for 2.6GW for the same cost.

Scottish Power, Shell and Falk have also been awarded bids in the latest round of contracts.

The scaling up of wind power will contribute to Scotland’s 2045 net zero ambition and support a vision for the nation to become a future major exporter of renewable energy, including developing clean hydrogen.

“ScotWind puts Scotland at the forefront of the global development of offshore wind, represents a massive step forward in our transition to net zero, and will help deliver the supply chain investments and high quality jobs that will make the climate transition a fair one.

“It allows us to make huge progress in decarbonising our energy supply – vital if we are to reduce Scotland’s emissions – while securing investment in the Scottish supply chain of at least £1 billion for every gigawatt of power. This will be transformational.

"And because Scotland’s workers are superbly placed with transferable skills to capitalise on the transition to new energy sources, we have every reason to be optimistic about the number of jobs that can be created.”

The First Minister added: “That means, for example, that people working right now in the oil and gas sector in the North East of Scotland can be confident of opportunities for their future.

“The scale of opportunity represented in today’s announcement exceeds our current planning assumption of 10GW of offshore wind - which is a massive vote of confidence in Scotland.

“So we will now embark on the rigorous consenting process required to make sure we can maximise the potential that clearly exists in offshore wind while also ensuring that the impacts of large scale development – including on other marine users and the wider natural environment - are properly understood and addressed.

“While it is not yet possible to say with certainty what the scale of development will ultimately be, there is no doubt that the scale of this opportunity is transformational - both for our environment and the economy.”

74 applications had been made for the seabed contracts – with just over 7,000 km2 allocated out of a maximum 8,600km2 in the Scottish Government’s sectoral marine plan.

“Just a couple of months after hosting COP26, we’ve now taken a major step towards powering our future economy with renewable electricity.”

He added: “In addition to the environmental benefits, this also represents a major investment in the Scottish economy, with around £700m being delivered straight into the public finances and billions of pounds worth of supply chain commitments.

“The variety and scale of the projects that will progress onto the next stages shows both the remarkable progress of the offshore wind sector, and a clear sign that Scotland is set to be a major hub for the further development of this technology in the years to come.”

Climate campaigners have welcomed the investment in renewable energy.

Fabrice Leveque, climate and energy lead at WWF Scotland, said: “These results are a big vote of confidence in renewable power and Scotland’s green economy.

“Offshore wind has a vital role to play in helping to cut our climate emissions, and is already powering hundreds of thousands of Scottish homes.

“As we electrify more of our transport system and change how we heat our homes and buildings, it’s only right we continue to harness the power of this natural resource right on our doorstep. Each of these projects could create hundreds of jobs and will have a role in helping put Scotland on a path to a green recovery.”

"This auction alone is bringing in a bumper payday of £700 million for the Scottish Government; the supply chain investment if all projects go ahead could be up to £25 billion, creating tens of thousands of jobs.

“It’s vital for the economy and for the climate that these projects progress smoothly to delivery, and the revenue generated must be channelled into accelerating the UK’s transition to clean energy.

“New renewable power is vital, but on its own it’s not enough. We need home insulation, upgrades to the energy system, with retraining and support for people working in high carbon industries as they decline.”

He added: Those who don’t learn from history are destined to repeat it. It looks like the Scottish Government have surrendered vast chunks of the North Sea wind resource for a relative pittance just as Westminster gave away Scotland’s oil in the 1970s.

“Instead of a one off payment of under £700 million there should be annual payments. Instead of Scottish resources being just handed over to international investment companies there should be a public stake in every single field.

“One has to question the basic competence of Crown Estate Scotland. They think they have auctioned away 10-12 GW of power. Informed industry estimates are the real capacity from this round alone is double that.

“Offshore wind is fast becoming the most lucrative major power source on the planet. Scotland has one quarter of the resource of Europe. It will be cold comfort to Scottish pensioners shivering in their homes facing vast fuel bills to know that the Scottish Government have given away so much of the green power of the future for so little in return.”