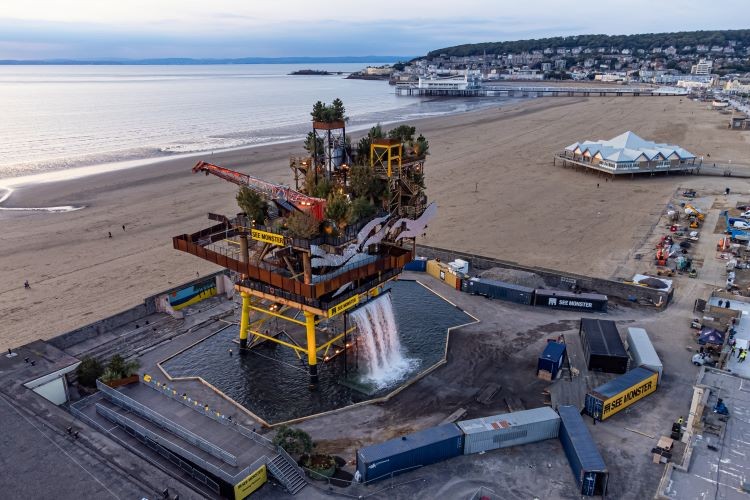 Seemonster, a design experiment led by Newsubstance, seeks to encourage visitors and designers to “look optimistically forward” in the field of renewable approaches.

Newsubstance has led experimental project Seemonster, which saw a decommissioned oil rig turned into an installation to encourage reuse.

Seemonster is one of ten central-government-funded projects commissioned as part of Unboxed festival. The festival aims to champion experiments within creativity across the UK and encourage the collaboration of cross-sector teams, from the creative industries to those who work in science, technology, and engineering.

Newsubstance comprises a full creative, design and fabrication team. According to the studio’s founder and creative director Patrick O’Mahony, the team works across “ceremony and entertainment designing” and creates “big, ambitious structures”, such as for the Coachella music festival.

O’Mahony explains how the first stage of the funding application process involved forming “a team of interesting people”. After being selected out of 300 teams in October 2020, Newsubstance and partners entered a three-month research and development phase.

From early conversations, it was clear that everyone had an interest in “reuse as a principle”, “renewable technologies” and “the significance of Great British weather to our cultural identity”, says O’Mahony. He adds that these elements became the “three pillars” of the project’s narrative, along with a wider focus on “looking optimistically forward”.

When the search for the installation’s base structure started in March 2021, O’Mahony says they came across “a graveyard of decommissioned off-shore rigs”. He adds that one of the project’s barriers was the logistics of the “permissions and processes” they had to go through to get the rig into the UK.

There was something meaningful about taking a 25-year-old rig from the North Sea and “rehabilitating it”, says O’Mahony, as it had “spent its life taking from the earth” but now had an opportunity to “reframe the conversation”. He adds, “The rigs exist globally, and all of them go through decommissioning cycles, but no one has ever cracked how to reuse them like we have before, so it’s a world-first in that space.”

Once the team knew they could source a rig, it was decided that it would be situated it in a coastal town as it would be easier to bring the rig into it. O’Mahony also says that a coastal location resonated with the “Great British weather” theme, as visitors often experience a variety of weather conditions on UK beaches.

He explains that Weston-super-Mare was “a favourite” from the start and provided them with “a venue right on the beach” plus the added value of Banksy’s Dismaland having been there.

Though bringing a structure of that size onto a beach is “not without its controversy”, O’Mahony says both the local people and council in Weston-super-Mare were supportive. Despite this, Newsubstance and the wider team came up against other barriers, such as building in unpredictable British weather conditions which slowed down the project.

The structure stands at 35 metres and has four publicly accessible levels. It houses various installations, such as a ten-metre-high waterfall, a 6,000-piece kinetic installation which forms the Seemonster’s scales, kinetic wind sculptures, a wild garden, a seated amphitheatre and, at its base, a broadcast studio.

While Newsubstance operated as creative directors across the project, the team worked with different collaborators where needed. Across design and build, there were “almost 200 people involved in total”, say O’Mahony.

Self-employed greensman Peter Beardsley worked across the design and planting of the wild garden, selecting grasses plants and trees that would thrive in a seaside micro-climate.

The WindNest installation comprises two rotating airborne pods and seeks to generate clean energy through wind and solar technology by powering the irrigation system for the Garden Lab on the structure. Designed by American artist Trever Lee and made in collaboration with Land Art Generator Initiative, the installation aims to present an innovative solution to achieving a net-zero carbon future.

Wales-based kinetic sculptor Ivan Black has created two sculptures which seek to represent the sun and moon. Sections of the sculptures rotate on their symmetrical axes when set in motion by the wind. Being made from aluminium means it should withstand the elements, particularly the corrosive salt in the sea air.

Architect Brian Buckner worked on “the masterplan for the layout” to maximise “people flow and the functionality of the design”, says O’Mahony.  Newsubstance’s internal design team worked on the scales of the monster, which sit at the front of the structure.

What happens when it finishes?

When the festival ends on 5 November, the whole structure will be decommissioned, stripped down and recycled. According to O’Mahony, “all the renewables from the structure will go into the wider region of Weston-super-Mare”, such as the wild garden, which will be transfered to a new park in the area.

While the Seemonster’s time in Weston-super-Mare is finite, O’Mahony says that he is “already seeing a ripple effect from the project”. He adds, “Now we have a blueprint for accomplishing reuse with this kind of structure and we’ve had calls with partners in the states and in the Middle East about reuse in their territory.”

Although O’Mahony thinks that “design in renewables hasn’t really moved forward that far” in recent years, he believes that this project is a “huge step in the right direction”.