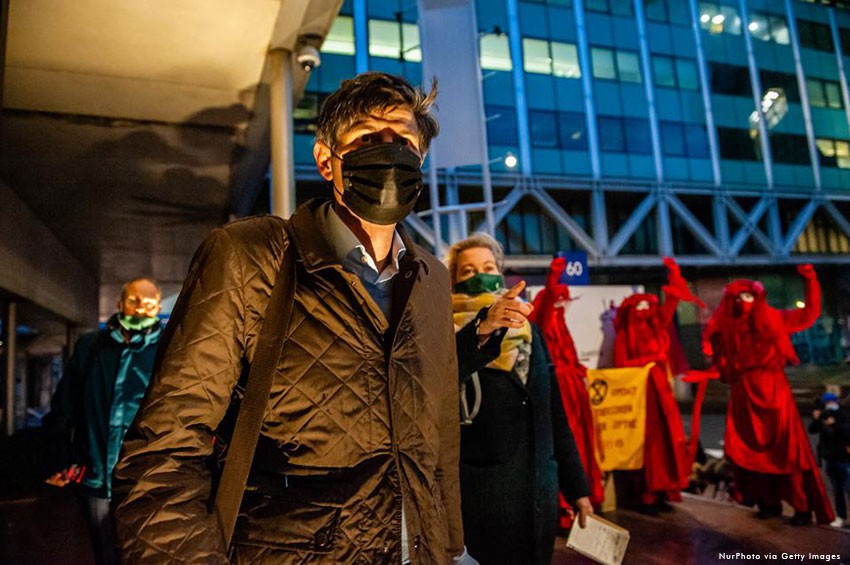 Oil giant Shell has been taken to court in the Netherlands by activists who allege the company has knowingly undermined global climate targets.

The groundbreaking case is being brought by an alliance of climate activists and organizations, who claim that Shell’s activities threaten human rights by failing to take carbon-cutting action in alignment with Paris Agreement targets.

The plaintiffs, led by Friends of the Earth Netherlands, known in the country as Milieudefensie, are demanding that the company reduce its greenhouse gas output by 45% by 2030 from 2019 levels, which Shell says totaled 70 million tons of CO2 equivalent emissions.

In his opening statement at a court hearing in The Hague on Tuesday, Roger Cox, lawyer for Friends of the Earth Netherlands, said:

“Shell’s policies put it on a collision course with international climate agreements … It is extremely dangerous and puts a brake on any action individual countries might be willing to take.”

Prior to the Tuesday hearing, Friends of the Earth Netherlands director Donald Pols said: “This is a unique lawsuit with potentially significant consequences for the climate and the fossil fuel industry globally. We are confident that the judge’s final verdict will force Shell to adhere to international climate goals and stop causing dangerous climate change.”

The claimants brought the case following last year’s decision by the Dutch Supreme Court to uphold a finding that the Dutch government has “obligations to urgently and significantly reduce emissions in line with its human rights obligations.” In the new case, the alliance is alleging that Shell’s actions violate Articles 2 and 8 of the European Convention on Human Rights, namely the right to life and the right to family life.

Shell has rejected the plaintiffs’ claims regarding its culpability, but the company says it agrees that global action is needed to combat climate change. In court, Dennis Horeman, lawyer for Shell, said: “No company can change the energy system by itself … All countries where Shell operates are determining policies to shape the energy transition. Shell will have to adjust its priorities and investments to those policies.”

The case has been in the making for more than two years. In a response to an April 2018 letter from Friends of the Earth Netherlands titled “liability for inadequate climate policy,” Linda Szymanski, company secretary for Shell, wrote: “We do not believe that these claims have merit; nor do we consider that the courts provide the right forum to advance the global energy transition. I would, however, like to share the Shell Group’s intent to move in step with society towards a lower carbon future, including some of the actions we are taking, working with others, to achieve this ambition.”

Szymanski went on to say that Shell “strongly supports the goals of the Paris Agreement,” and that the company had taken an “industry-leading approach” to reducing its emissions.

In announcing the case this week, Sara Shaw, international program coordinator for Climate Justice and Energy with Friends of the Earth International, said: “Shell is taking this case very seriously, and so should every climate wrecking corporation, CEO, board member and investor.”

“A mere 100 corporations are responsible for the majority of global emissions,” she added, “and the broader climate litigation movement is on the precipice of finally holding corporations to account and legally requiring change.”

It is not the first time Friends of the Earth Netherlands has brought a case against Shell. Ongoing is the more than 12-year-long case brought by four Nigerian farmers against the oil giant; they allege their lands were polluted by oil leaking from Shell pipelines. Two of the original plaintiffs have died since the suit was first brought, but the case continues.

Shell ranks among the largest oil companies, but it is not the most polluting: research from the Climate Accountability Institute shows that accolade belongs to Saudi Arabia’s Saudi Aramco, which released some 59 billion tons of CO2 equivalent emissions between 1965 and 2017, while American multinational Chevron CVX +2.8% has produced 43 billion tons over the same period. In the institute’s ranking of the top 20 most-polluting hydrocarbon firms, Shell came seventh, responsible for just over 31 billion tons of greenhouse gases over the 52-year period. By comparison, in 2019, human activity globally generated a total of 33 billion tons of CO2.

Four public hearings in the case have been scheduled, with the last on December 17.