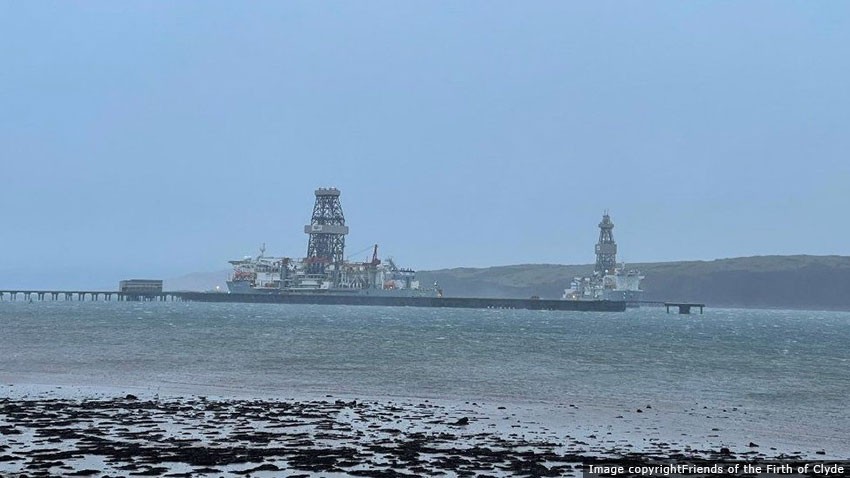 Power has been restored to a drilling vessel which broke free from its moorings off the North Ayrshire coast.

The Valaris DS4 was moored at Hunterston Terminal, at Fairlie, in the narrow waters between the mainland and the Isle of Cumbrae.

A mayday call was was received by the Coastguard at 19:22 on Tuesday evening when the 228m (748ft) long ship began to drift without power.

The eight-strong crew of the Valaris DS4 deployed the ship's anchors.

A second ship moored at the terminal has also required assistance and is being held in position by tug boats.

A HM Coastguard spokeswoman said the Valaris DS4 is now temporarily anchored off Hunterston and power has been restored to the vessel.

She added: "The Maritime and Coastguard Agency through its counter-pollution officers and HM Coastguard continue to monitor a drill ship which broke loose from its mooring at Hunterston Terminal in Ayrshire.

"The engines have now been restored and the ship's technical managers are working with the port authority to return the ship to a place of safety.

"A moored vessel at the terminal has also required assistance in the worsening weather and is currently being helped to hold its position by four tugs."

The Girvan RNLI lifeboat and coastguard rescue teams remain on scene to provide support to the operation, the spokeswoman added.

There were no reports of any injuries or pollution as a result of the incident.

The vessel, which has a displacement of 96,000 tonnes, is used for deep water drilling operations.

A statement issued by Noah Ship Management, the technical managers of the ship, said the quayside moorings failed in high winds.

It added: "The vessel remains in position in the Hunterston Channel, safely anchored and with her engines and thrusters operational, should they be required."

It is expected the ship will be moved back to the quayside when the weather improves.