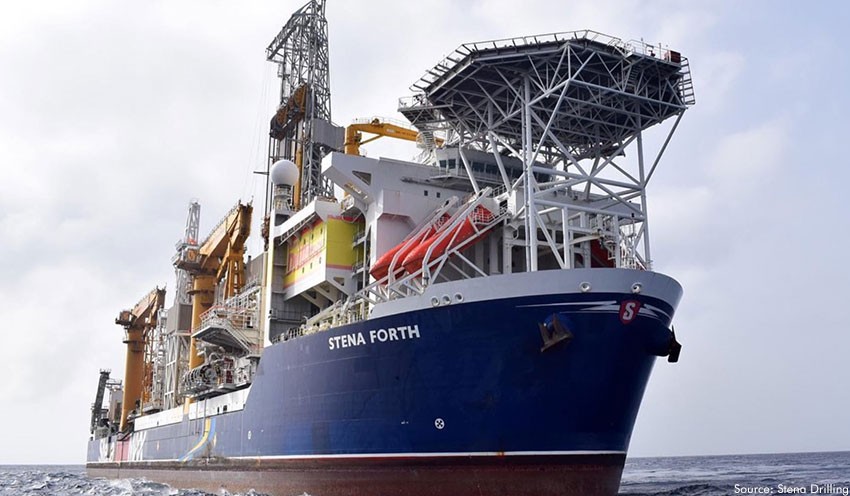 Offshore drilling contractor Stena Drilling has won a deal from Chinese oil company CNOOC for the use of one of its drillships offshore Canada. The company also started using Intebloc’s data management system.

According to Bassoe Offshore, CNOOC hired the Stena Forth drillship for work in the Flemish Pass, offshore Newfoundland and Labrador.

The drillship will drill one well in the Flemish Pass and the operation is expected to last around 90 days. Bassoe Offshore stated that the estimated day rate for the deal would be around $180,000.

Stena Drilling said: “The region is classified as a harsh environment, with water depths ranging from 330 meters to 1,200 meters and unpredictable weather conditions. Stena Forth’s ability for station keeping is essential to allow safe and efficient completion of the program“.

According to the latest AIS data, the rig is located in Las Palmas. Before working for CNOOC, the Stena Forth is first expected to mobilise to Block 47 offshore Suriname in late December 2020 or early January 2021 where it will start a one-well drilling operation for Tullow Oil in January or February 2021.

Offshore Energy previously reported that Tullow’s Suriname well was initially supposed to be drilled in 2020 but has since been delayed.

Then, the rig will head offshore Israel where it will be used for the decommissioning of four wells for Chevron under a contract awarded earlier this month. The work is estimated to take around 80 days under a day rate of $175,000.

There is an option to extend the contract for up to three P&A wells and one completion in Israel, as well as one further option well to be drilled off Cyprus.

As for the rig, the Stena Forth – built by Samsung Heavy Industries in South Korea – is a harsh environment, dynamically positioned DP Class 3 drillship capable of drilling in water depths up to 3,000 meters, with a maximum drilling depth of 10,700 meters.

Crane and lifting technology firm Intebloc has been awarded a three-year contract from Stena Drilling to provide Rig-Ware, its data management system, to enable increased control of vessel lifting equipment.

The system, deployed offshore across six of Stena Drilling’s assets in Europe, Africa, and South America, will allow onsite personnel to track and monitor the integrity and usage of all loose and fixed lifting equipment.

According to Intebloc, the technology will improve offshore safety and reduce the risk of lifting equipment failures.

The award follows several successful trials on Stena Spey and Stena IceMAX to demonstrate the full functionality of the system, its speed, ease of use and its capability to replace conventional paper-based systems.

Ross Mcleod, Intebloc CEO, said in announcement on Tuesday: “Stena Drilling has been integral to the development of the Rig-Ware system. Their feedback enhanced our offering to control assets, protect equipment, and optimise deck management”.

Colin Dawson, Stena Drilling digital transformation manager, added: “We have been working with Intebloc for nearly two years and have carried out extensive trials on a number of our assets. We are very pleased with the way our feedback has been incorporated into the system. I am confident the high-cost savings and efficiency expectations will be realised with Rig-Ware”.