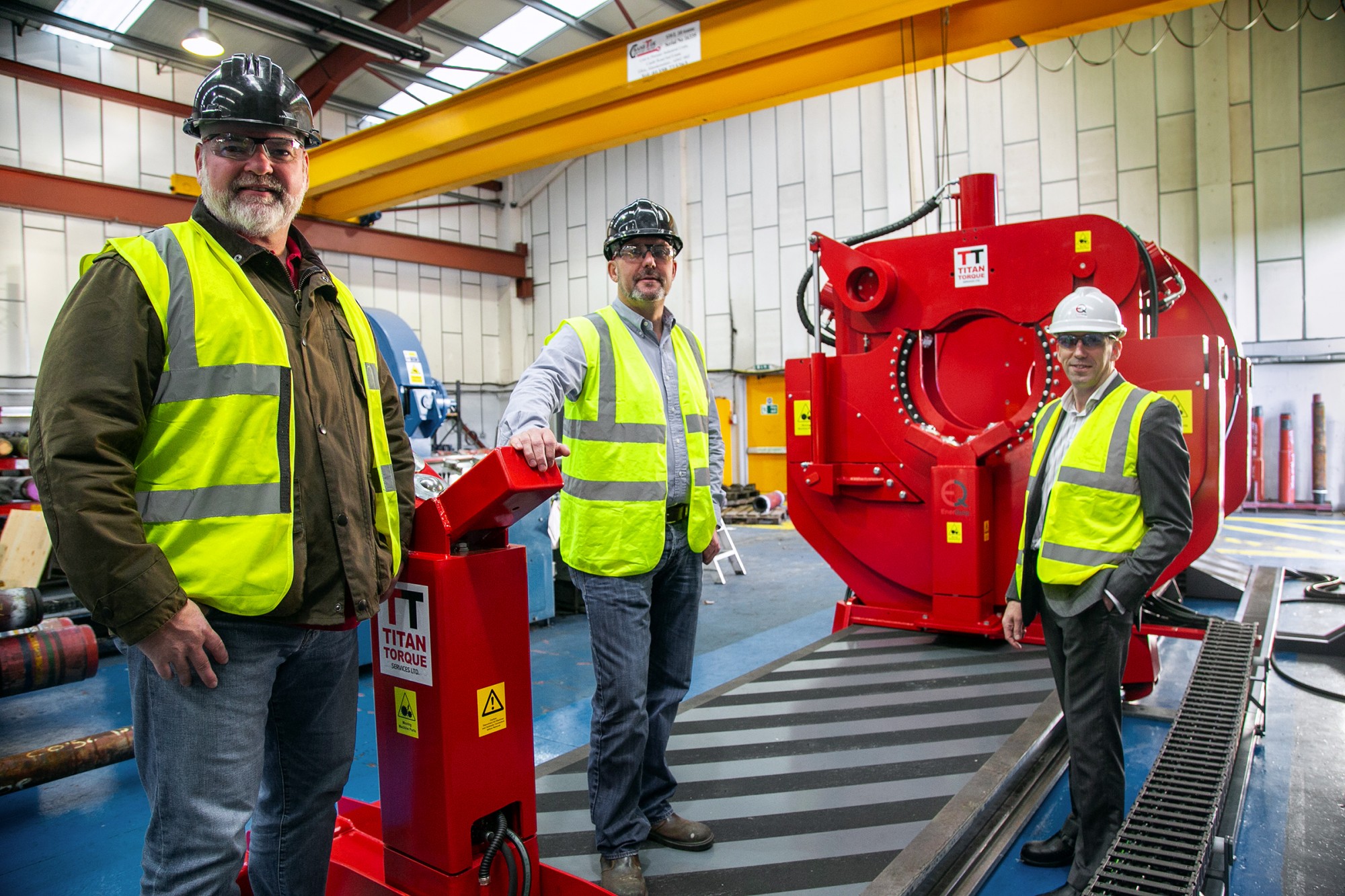 Leading oilfield services business Titan Torque has doubled its operational capacity – and signalled its long-term confidence in the offshore oil and gas industry – with a major investment in a new torque system from EnerQuip, the torque machine specialists.

Both Titan Torque and EnerQuip, which designed and manufactured the new unit for Titan, believe the combination of its scale, capability and power make it the largest machine of its kind in Europe.

Situated in Aberdeen, the unit, used for the make-up and break-out of tools in the drilling sector, represents a substantial six-figure outlay for Titan Torque, which supports nearly all operators and large services companies operating in the North Sea that require its solutions.

Bruce Jepp, director at Aberdeen-based Titan Torque, said: “The introduction of the new unit to our operations reflects our optimism about the strength and resilience of the market over the coming years. It significantly broadens our service offering. With the increased torque and maximum outer diameter (OD) available, we are now able to manage operations that were previously beyond our capabilities. From a business perspective, it positions us to capitalise on new opportunities with existing and prospective customers.”

Fellow director Keith Gaskin added: “From the outset EnerQuip demonstrated an in-depth understanding of our requirements and have delivered a product of the highest quality; they have built one of the most advanced torque machines on the market. We’re delighted this contract was delivered by an Aberdeen business with a growing international reputation.”

Barry Marshall, business development manager at EnerQuip, said: “This machine highlights the capability of our skilled engineers and the reliability of our equipment. We’ve established a long-standing relationship with Titan Torque and this delivery is the culmination of our dedication to supporting their torque machine fleet over a number of years. We’re proud to be working with them on their operations as market demand grows.”

Formed in 2015, EnerQuip is already recognised globally as the torque machine solution specialist with more than £5.6million ($7.5m) of contracts awarded in the United States, Europe, the Middle East and Asia Pacific in 2018.

The new Titan unit handles standard API connections found on drilling tools such as stabilisers, drill collars, rotary steerables, drills bits and premium threads commonly found on casing and completion equipment. The unit, formally called FR 24:120, is fully rotational. It has a 10-metre bed, is capable of 120,000 ft/lbs (foot-pounds) of torque and can handle 24-inch diameter tubulars – features which, together, are believed to make it the largest and most technically advanced unit of its kind in Europe.

Titan’s other torque machine, which will remain operational, is focused upon API connections with up to 200,000 ft/lbs of torque. The business also has a 23m (75ft) push-pull unit to remove and insert hangers and running tools in a safe and controlled operational process.

In addition, Titan has a large stock of hole openers, up to 64 inches, and also provides pressure testing and logistics services.

Titan, which has a staff of 15, plans to add at least two more technicians to its team during 2018 and is also set to launch a torque service in Algeria by the end of the year to support customers’ West African operations.

In addition, the firm is also the European representative for Lee Energy Systems, a Canadian company that has developed a non-explosive perforation tool that has had 10 successful runs on North Sea projects. Titan Tools, which provides the sale and rental of downhole technical drilling tools, is the sister company of Titan Torque, which is also based at Links Place.