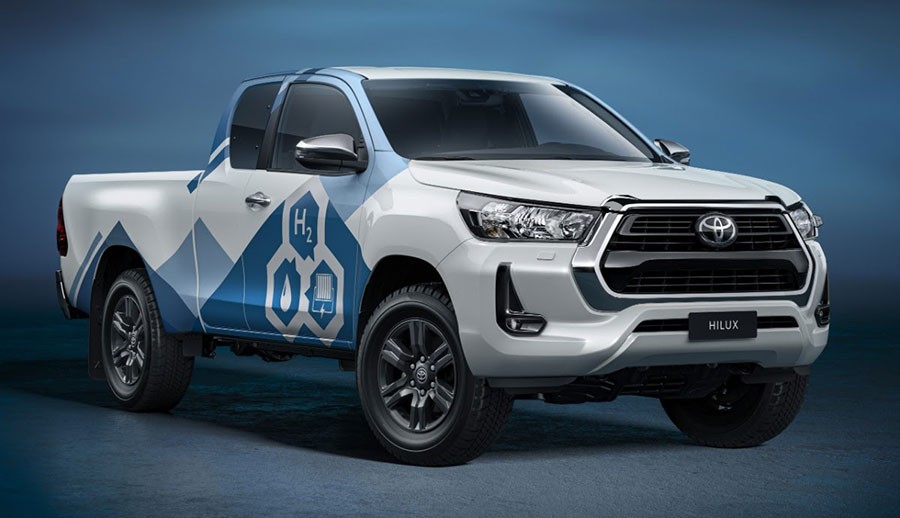 Toyota is leading a consortium to develop a prototype hydrogen fuel cell-powered version of its world-famous Hilux pick-up at the company’s UK vehicle plant in Burnaston, Derbyshire. Toyota Motor Manufacturing UK (TMUK) has successfully secured UK Government funding for the project through the Advanced Propulsion Centre (APC), an organisation supporting the development of cleaner technologies and new mobility concepts.

This new opportunity to bring zero emission technology to the commercial vehicle market reflects evolving customer demand and Toyota’s 360-degree approach to sustainable mobility across all sectors. The APC funding will enable TMUK to develop hydrogen technologies for this specific vehicle market segment during the next three years.

The consortium, led by Toyota Motor Manufacturing UK (TMUK) will receive funding to cover the development of a hydrogen fuel cell electric Hilux, working in collaboration with highly skilled UK-based technical engineering partners Ricardo, ETL, D2H and Thatcham Research. The project will make use of components from Toyota’s second generation fuel cell system, as featured in the latest Toyota Mirai saloon, to transform a Hilux into an electric vehicle. While TMUK is leading the project, Toyota Motor Europe (TME) R&D will provide technical support to help the UK-based teams to build their expertise and become self-sufficient in developing next generation hydrogen drivetrain technologies.

The APC, is a non-profit organisation working with the UK Government, the automotive industry and academic bodies to accelerate the industrialisation of technologies to support the transition to net-zero emission vehicles delivery. It plays a key role in the UK’s automotive sector, offering opportunities to bridge the gap between industry and future technological requirements. It aims to help achieve significant changes in the industry, creating commercial and strategic outcomes that benefit the UK. Its funding specifically covers the later-stage research and development that progresses a product from proof-of-concept to a prototype vehicle.

Within the scope of the funding bid, initial prototype Hilux vehicles will be produced at Burnaston during 2023. Once successful performance results have been secured, the intention is to prepare the vehicle for small series production. The project is an exciting opportunity to investigate a further application of Toyota’s fuel cell technology in a vehicle segment that is key to a number of industry groups and will help support the sector’s move towards decarbonisation.

Richard Kenworthy, TMUK Managing Director, said: “The opportunity that this funding enables is significant and goes towards developing the technical capabilities not only of our employees here at our site in Burnaston in the East Midlands but also of those within the wider consortium partners.  This region is heavily committed to supporting zero emissions mobility and we see this project as a great opportunity to contribute to the critical path on the road to carbon zero mobility.  This UK Government funding will enable teams within the consortium to acquire key skills that can then be used to investigate other fuel cell applications.”

Matt Harrison, Toyota Motor Europe President and CEO, said: “The UK is one of the key markets for pick-up trucks and an important market for Toyota. This funding represents a tremendous opportunity to develop a zero emission solution in a critical market segment. We would like to thank the UK Government for the funding that will enable the consortium to investigate the development of a fuel cell powertrain for the Toyota Hilux, supporting our carbon neutrality ambition.”

About the consortium members

Toyota Motor Manufacturing UK (TMUK) produces Corolla Hatchback, Touring Sports and Commercial models at its production centre in Burnaston, Derbyshire, and hybrid engines at its facility in Deeside North Wales. TMUK began production in 1992 as Toyota’s first fully-owned manufacturing business in Europe and went on to become the company’s first location for hybrid electric vehicle manufacturing outside Japan. To date, Toyota has invested more than £2.75 billion in its UK manufacturing operations; TMUK currently employs more than 3,000 people and supports many further jobs in its extensive UK supplier network.

Ricardo is a global strategic engineering and environmental consultancy specialising in the transport, energy and scarce resources sectors. It will support the technical integration of the fuel cell components into the Hilux chassis.

The D2H group of companies provides high-technology engineering services in simulation, modelling, aerodynamics, thermodynamics and design for motorsport and other high-performance industries. Its thermodynamic expertise will be crucial to the project.

Thatcham Research was established by the UK’s motor insurance industry in 1969, with the aim of containing or reducing the cost of motor insurance claims while maintaining safety standards. It will support the project in terms of crash safety and insurance ratings.