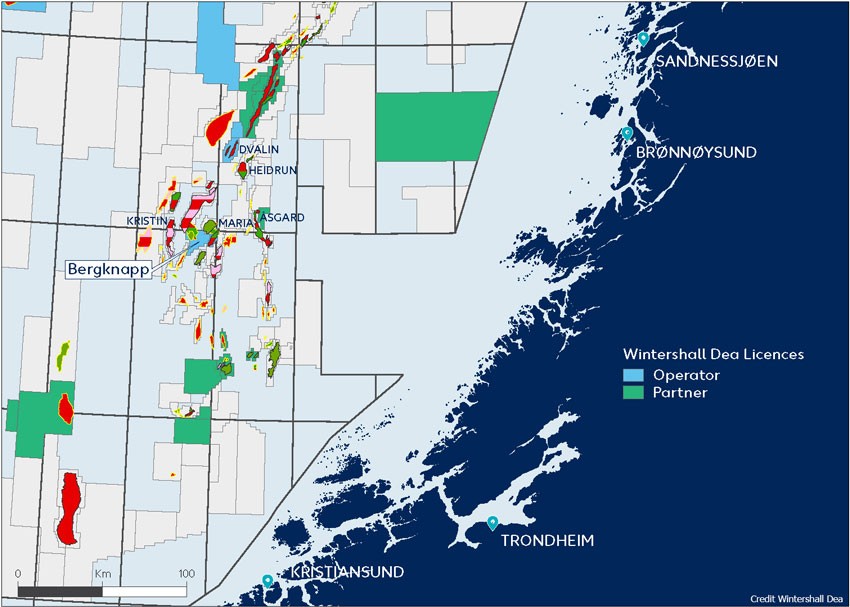 “This exciting discovery near existing infrastructure confirms the untapped potential of Norway as a core area for exploration, development and production now and in the future,” said Hugo Dijkgraaf, Wintershall Dea Chief Technology Officer and responsible Executive Board member for global exploration. “As a global company, Wintershall Dea is committed to Norway and to developing new fields like the Bergknapp discovery on the Norwegian Continental Shelf.”

With Maria and Dvalin Wintershall Dea already has fields in production and development in the area around Bergknapp. Exploring around existing infrastructure is part of Wintershall Dea’s strategy for Norway. Together with its partners, the company will consider future development options for the Bergknapp discovery taking into account the current market environment.

“The Norwegian Sea is a key area for Wintershall Dea Norge. Apart from our other Haltenbanken assets, we are also a key operator in the Vøring basin and have licenses in other areas of the Norwegian Sea. With our investment on the shelf, we are exploring and developing new fields, while also supporting our existing fields and infrastructure,” said Alv Solheim, Wintershall Dea Norge Managing Director.

Wintershall Dea is operator of the discovery in PL 836S with a 40% share. License partners are Spirit Energy Norway AS (30%) and DNO Norge AS (30%). The well will be temporarily suspended, while a future production test is being considered.

Wintershall Dea has been active on the Norwegian Continental Shelf for more than 45 years and is now Norway’s third biggest gas producer. Today the company has more than 100 licences – around a third of them as operator – and a production volume of 146,000 barrels of oil equivalent per day (2019). In the latest APA licence award in early 2020, Wintershall Dea was awarded nine additional new licences (three as operator) underpinning that Norway is one of its areas for growth.