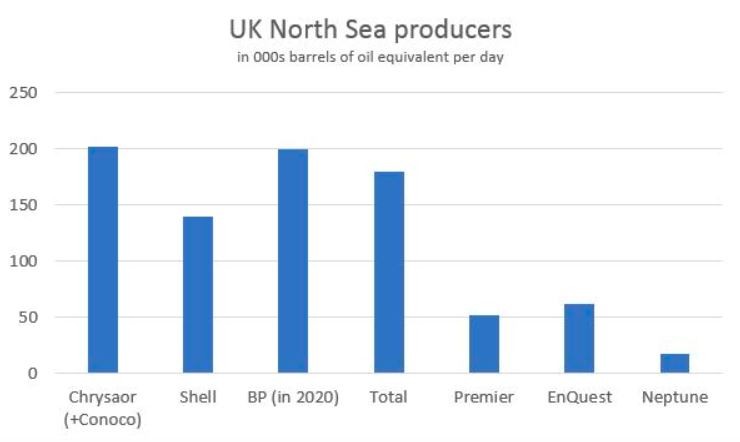 Chrysaor, the private equity backed operator is reportedly close to a deal to purchase ConocoPhillips’ North Sea oilfields, a deal that would have them lead the way in north sea productoin.

The North Sea has undergone a major transformation over the past four years as major operators have sold assets to new and smaller operators such as Chrysaor that can produce with lower overheads and quicker decision making.

Chrysaor and Conoco have agreed on the main terms of the acquisition in recent weeks with the deal expected to conclude in the coming days.

Chrysaor, backed by private equity firm EIG Global Partners, became one of the biggest North Sea player after acquiring assets from Royal Dutch Shell for $3.8 billion in 2017 and aims to produce up to 130,000 boed by next year, the acquisition of Conoco would catapult it to becoming the British North Sea’s largest producer ahead of BP, which is aiming to grow its British North Sea output to 200,000 boed by 2020.

Energy and chemicals firm Ineos, owned by British billionaire Jim Ratcliffe, had previously abandoned exclusive talks with the U.S. company over the fields, including a 7.5 percent stake in the Clair project West of the Shetland Islands, whose other owners are BP, Shell and Chevron.

Another bidder was energy-focussed private equity group HitecVision, which has been expanding aggressively in the Norwegian North Sea, partially in partnership with Eni.

Shell has said it produced 140,000 bpd last year, Total around 180,000 boed and smaller companies such as Premier and EnQuest produce less than 100,000 boed in the British North Sea, according to company and Stifel research data.

Chevron, which is estimated to produce around 75,000 bpd in the region, is also in process of selling its British North Sea assets. Israel’s Delek via its North Sea unit Ithaca Energy is front-runner for the portfolio, industry sources say.