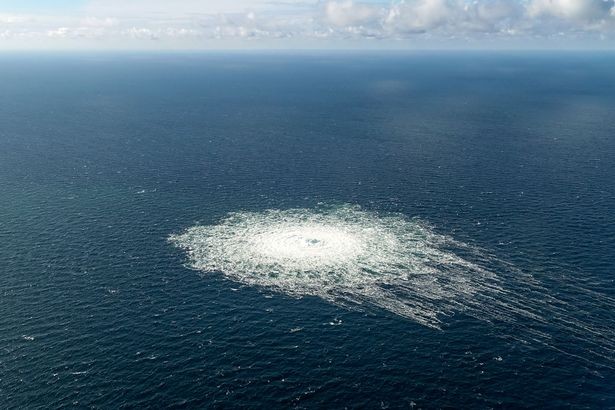 The CIA warned European allies that the Nord Stream pipelines could be targeted a matter of weeks ago, it has been revealed.

Oil continues to pump out into the Baltic Sea after three massive tears appeared in the lines connecting Russian gas to Germany yesterday.

Sources told German publication Der Spiegel that intelligence agents delivered a "strategic warning" to nations including Germany over the summer.

Though the warning was not specific and the agent refused to name Russia as the potential culprit, Berlin was told that the pipes were at risk.

Danish armed forces said the surface area of the largest gas leak shows disturbance of a well over one kilometre in diameter.

Mykhailo Podolyak, Adviser to the Head of the Office of President of Ukraine Volodymyr Zelensky , said the gas leak is "nothing more that a terrorist attack planned by Russia and an act of aggression towards EU".

Though Moscow is yet to be challenged publicly for the ruptures, world leaders believe the leak was caused by "Russian sabotage", officials told the Washington Post.

The EU on Wednesday rushed to ramp up security safeguarding the bloc's energy infrastructure in response to what it called acts of sabotage on the Nord Stream pipelines, while warning of a "robust and united response" should there be more attacks.

Denmark and Sweden on Tuesday said major leaks on the two Nord Stream pipelines in the Baltic Sea were caused by deliberate acts of sabotage carried out in each of the two countries' exclusive economic zones.

Neither pipeline was in operation amid an energy standoff between Russia and Europe. Moscow has slashed gas deliveries to Europe after the West imposed sanctions over Moscow's invasion of Ukraine.

The European Union warned of a strong response should any of the bloc's active infrastructure be attacked.

"Any deliberate disruption of European energy infrastructure is utterly unacceptable and will be met with a robust and united response," EU foreign policy chief JosepBorrell said in a statement on Wednesday.

He was echoing a warning by European Commission chief Ursula von der Leyen who attributed the pipeline leaks to acts of sabotage late on Tuesday.

"Any deliberate disruption of active European energy infrastructure is unacceptable and will lead to the strongest possible response," she said on Twitter.

Borrell announced the bloc would step up the protection of its energy infrastructure following the incidents.

"We will support any investigation aimed at getting full clarity on what happened and why, and will take further steps to increase our resilience in energy security," he said.