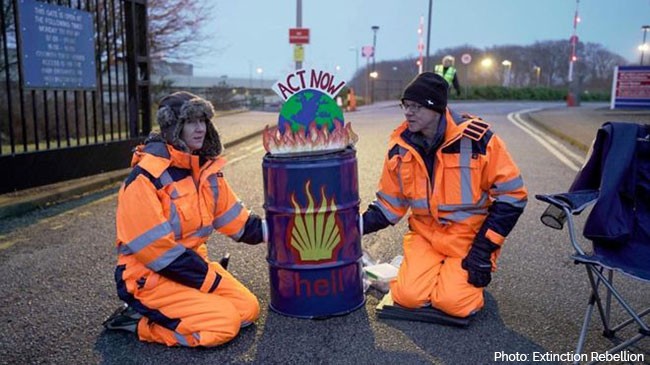 Activists arrived at the Altens base at about 06:30 and plan to remain at the site all day "to hold Shell to account".

The group said the protest was part of its two-week long campaign targeting the fossil fuel industry.

Shell said it was addressing its emissions and helping customers to reduce theirs.

And industry body Oil and Gas UK (OGUK) said climate change would not be solved by "stunts".

Extinction Rebellion also had its purple boat at the site.

The protesters plan to walk through Aberdeen city centre, starting at the railway station at 13:00, then going via Union St and the harbour.

A statement from Extinction Rebellion Scotland said: "As Australia burns and Indonesia is flooded, with tens of thousands made homeless, the purple boat bears the words, "The Future You Fear Is Already Here", a reminder that catastrophic climate change is already under way across the planet, driven by Shell and the rest of the fossil fuel industry.

"Last week, as bushfires caused by climate change choked Australia, Shell celebrated the discovery of a huge new gas field off the coast of Western Australia.

The statement added that it was disrupting business as usual for Shell as it was "one of the top 10 carbon emitters in the world, and is projected to increase their output of oil and gas by 35% over the next 10 years".

One of the protesters, Michael, a 57-year-old management consultant, said: "Governments and corporations like Shell all agree that my children are facing a catastrophic climate and ecological collapse yet are doing next to nothing to prevent this.

"I'm here today because as a parent I am ultimately responsible for the safety of my children whether today, tomorrow or in 30 years time."

A Shell spokesman said: "The heightened awareness of climate change that we have seen over recent months is a good thing.

"As a company, we agree that urgent action is needed. What will really accelerate change is effective policy, investment in technology innovation and deployment, and changing customer behaviour.

"As we move to a lower-carbon future, we are committed to playing our part, by addressing our own emissions and helping customers to reduce theirs - because we all have a role to play."

"It's disappointing that this group is choosing to disrupt the normal working day of people in this industry, causing alarm rather than engage in meaningful discussion with key decision makers.

"Our industry is packed full of people with the engineering and environmental knowledge and skills to play a key part in reducing emissions and we are already taking action."

"The road was blocked from around 06:45, and road users are advised to avoid the area for the time being. We are liaising with both Shell and the protest organisers, Extinction Rebellion."

Staff at oil company EnQuest in Aberdeen have been sent home ahead of the planned protest walk through the city centre.