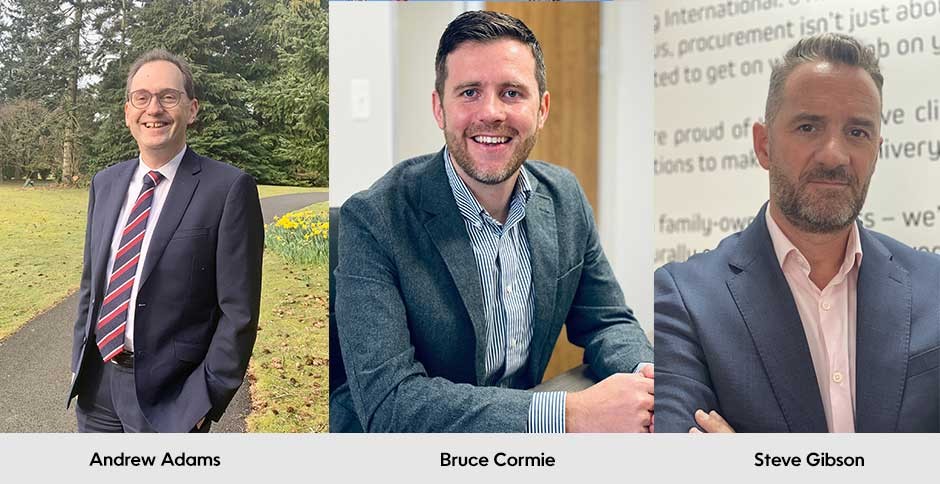 Aberdeen headquartered, global procurement specialists, Craig International, have made three new appointments to the board of directors to support its rapid international growth.

All three have been with Craig International since it embarked on its ambitious global expansion plans over the last few years and have contributed to success through adding new clients, expanding into new geographical markets and increasing turnover from £70M in 2015 to an estimated £120M this year.

Steve McHardy, joint managing director of Craig International, said: “These senior appointments come at a time when the group is seeing significant growth on an international level. In the Middle East, we have extended our global reach with the opening of an operational base in Oman and ongoing growth in Dubai and Qatar. In North America, we are expanding in Calgary and Houston to service our rapidly-growing client base and market share and our Cape Town facility has brought in a number of new clients.

“The appointments recognise the enormous contribution that Bruce, Steve and Andrew have made in these key regions. They have been instrumental in leading on the expansion of the business and will continue to drive sustainable growth.”

Bruce joined Craig International’s Aberdeen office in 2012 before relocating to Houston to become country manager, where he has been responsible for all operations within North America, including opening and managing the company’s base in Calgary. Prior to that, he worked in the oil and gas sector with a Norwegian company in the North Sea, Africa and the Americas. Over the past 10 years, he has overseen significant growth across the region, with annual turnover rising from $12million to $70million and staff numbers increasing from six to 27.

Steve gained experience in the UK and overseas, working in a range of shipping and supply chain roles before joining Craig International in 2018 as regional manager, Middle East. Since then, he has been instrumental in positioning the business for growth in the Middle East where annual revenue has grown from $15million to more than $40milion and staff numbers have increased from five to more than 40 across its bases in Dubai, Qatar and Oman.

A graduate of Aberdeen University with a MA Hons degree in Economics and Accounting, Andrew is a qualified chartered accountant and member of the Institute of Chartered Accountants of Scotland with more than 30 years’ financial experience in energy services, the past seven of those as Craig International’s finance controller. He has been heavily involved with the group’s expansion into new areas in the Middle East, setting up necessary finance functions and ensuring regulatory compliance. Prior to joining Craig International, Andrew held various finance roles in Aberdeen and Vancouver for CHC for 12 years.

With almost 130 staff, Craig International has a global network of pre-qualified suppliers, and over 80 procurement specialists in eight countries, providing cost-effective and efficient third- party procurement. With bases in the UK, Cape Town, Canada, Qatar, Oman, the UAE, Germany and the USA. Craig International provides a truly global service to the energy industry.