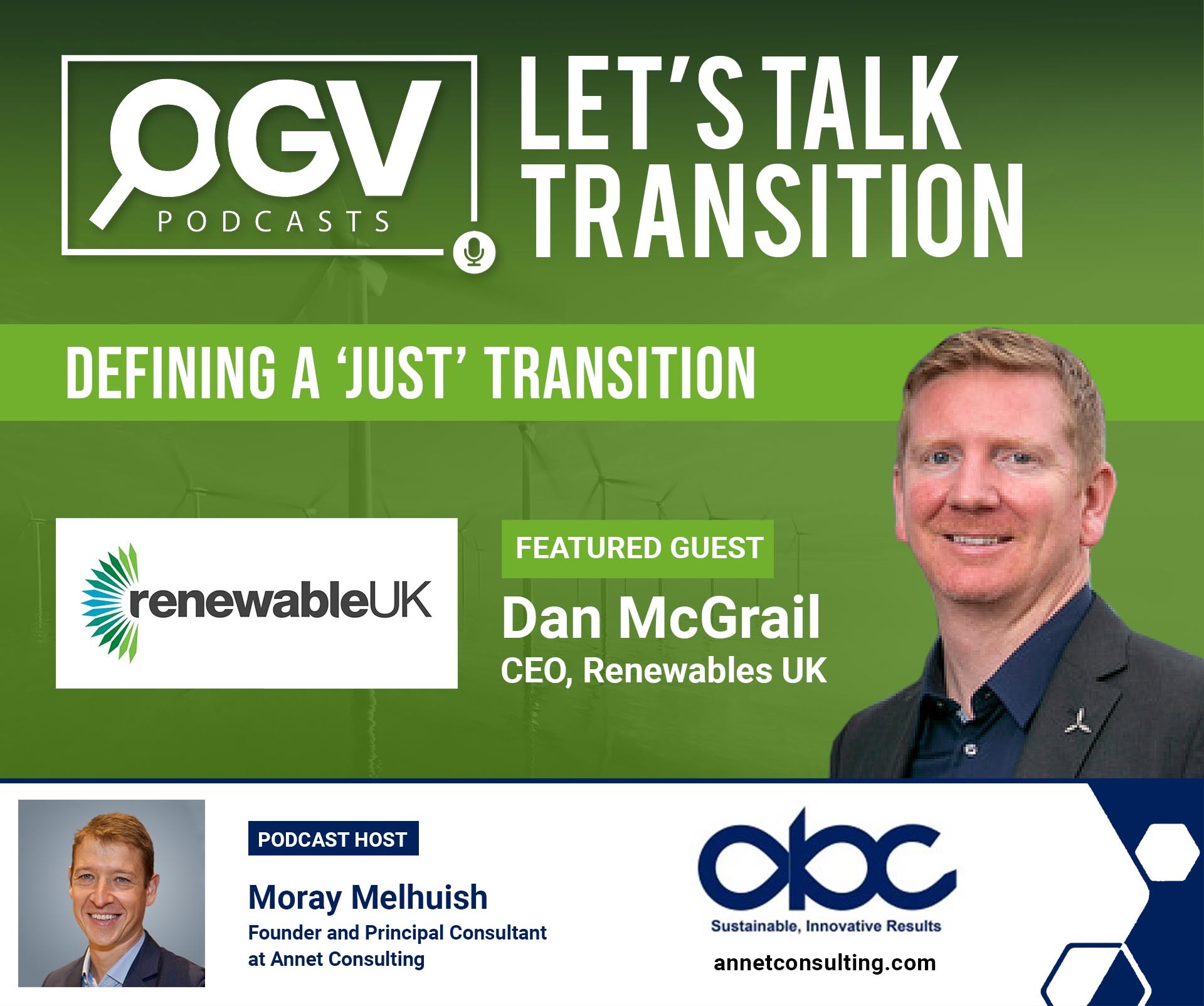 Good morning Dan and welcome to our ‘Lets talk Transition’ podcast series, can you give us an introduction to your organisation, Renewable UK?

”Renewable UK’ is a membership organization born out of the wind industry, dating back to the seventies. Believe it or not, it started as the British Wind Energy Association and then diversified three times before settling on for the last decade on being called ‘Renewable UK’.

We represent about 450 member companies and we're growing because the industry is growing but also because we're increasing our interest in activities beyond wind into sectors like tidal and new technologies such as green hydrogen and the companies we represent are really right across the whole gamut of the industry.

So, from the largest developers and companies transitioning into renewables from oil and gas,  right the way through the supply chain to the big manufacturers of turbines and electrical equipment and companies in the Marine sector. About half of our members are active supply chain companies and it's arguably one of the most exciting parts of the energy transition, in the potential growth of supply chain of UK companies.”

How do you define a just transition?

“It's a good question and I think to start off, we're an industry very much at the heart of net zero, so social justice and climate justice are very closely linked.

I think we can see the impact of the cost of living at the moment and therefore helping to reduce the cost of renewable energy, which has been very much been a part of the story so far, is key and helping  the sector to becoming the cheapest part of the electricity generation system is a huge part of that solution, because it means that the energy transition will work for everybody in the end.

That means this can’t be a transition which falls unnecessarily on those who can't afford it. Reducing the cost of renewables over the last decade has been a really important part of it and we need to think about the ‘Just transition’ on three different levels:

One is ‘People’ one is ‘Places’, and one is ‘Planet’, right? So, starting with ’People’, it really is about, jobs and creating employment opportunities. The industry grew from initially being subsidized to now being practically unsubsidized and in many cases there is a facility to pay back to the consumer. Creating jobs out of this for people across the country is an important part of the solution and as an industry we have to set ourselves targets for apprenticeships, for diversity and inclusion and helping workers transition from other sectors.

Clearly the energy transition will impact on many incumbent industries and therefore we want to make sure we create pathways for people to come out of those industries and into the wind industry, whether that's onshore, offshore, or whether that's in technical roles or in project management or engineering, or in many of the supply side aspects of this industry.

Then when we think about ‘Places’, our industry has a really unique proposition in terms of helping rejuvenate local economies, in particular in coastal communities, which have been perhaps declining and need rejuvenation.

Look at some of the great impacts we've had in places like Grimsby, which is now the biggest operations and maintenance hub in Europe for offshore wind. If we look at Hull, where Siemens employ a thousand people and are growing their factory there, where they manufacture blades and we are seeing the impact of that on a community, which has suffered from industrial decline, its really important.

Then for ‘Planet’, we have to start to pioneer in areas such as green steel. We have to pioneer in things like our marine activity and make sure we transition to zero emission vessels. In the future, we have to make sure that the blades on our turbines are recyclable and that we're not creating problems for the future. So, this kind of circular economy thinking is really important in the sector as we go forward. These are the three categories around the ‘Just transition’ that we work on, we track, and that in the future, will be producing more and more analysis on how our industry is performing against those criteria.

Its one of those things that often makes me chuckle a little bit, you know, when the industry has its detractors and people say: “Well the wind, you know, sometimes it doesn't blow...” as if the pioneers behind the wind industry didn't know that! - we are aware of the fact that wind is variable and we know that the capacity of wind farms is always going to be dependent on the weather conditions. The weather is predictable, however, it isn't necessarily controllable.

I think the first point where we need to start is that the cost of generating a megawatt hour from an entirely new wind farm that we start building today and start producing electricity from, is going to be a quarter of the cost of putting gas through a power station, which was built 20 years ago. That is the reality. Building new wind farms that costs a quarter of that and half of the cost of a nuclear power station, based on the prices for ‘Hinkley point C’. Therefore, we are already at an incredibly low base, so it makes absolute sense to build an energy system which harnesses as many megawatt hours from wind and from solar at as low a cost as possible.

You also have to recognize the fact that clearly there there's need for storage and we lobbied over a number of years to push for planning reforms to enable grid scale storage, which are now coming through. We are seeing an incredible pipeline of battery projects. I think just last year the pipeline of new grid scale battery projects was about 16 gigawatts and this year it's 32 gigawatts, which doubled in a year and our reports and analysis are available to explain that, but the government is now having to look at how to stimulate investments in things like long duration storage, because clearly it's going to be windier in the winter than it is in the summer.

We have to think about how we transfer demand to match that as well, but also the emergence of green hydrogen is now one of the key pillars in all of this - this offers the opportunity for storage over long term. It also gives us the opportunity to decarbonise the hard to abate sectors and essentially turbocharge net zero.

If we get a business model that works, and the government is consulting on that at the moment, I think the final point I'd make is that we are about to enter into an almost daunting period of major market reform. There's been much talk about so-called REMA – (Review of electricity market arrangements) - the last time we did something on this scale was electricity market reform, which came into force in 2014, but that started in 2008 and 2009. It was a long-term project to really rethink how our markets work and we now have to think about how we get cheap renewable power to consumers.

We are working on all of these things. You can see, for example, last month, or a couple of months ago, Vattenfall received funding from the government to do a demonstration of a turbine fully integrated with green hydrogen generation. We saw Scottish Power Renewables announce plans for a major green hydrogen production facility at Felixstowe, Orsted doing something similar with their project, the gig stack project in Grimsby.

There's a lot happening and I think the industry clearly cares about this and wants to work on it and sees there is a huge opportunity. I'm not under playing the problem or the size of the challenge but I also think it can be an overstated challenge because we have the engineering, the capability, and the identified solutions that we need to just work through the cost reduction trajectory and start to deploy at scale, which is really the secret and offshore improves this, the secret of getting it down to a competitive level.

Offshore wind and the renewables sector are about more than just carbon footprint and cost for Western Europe, with what's happened in Ukraine. To have true energy security for Western Europe, as an industry we have got to speed up the project cycle. How do we do that Dan?

Clearly energy security has moved back up the priority list in many respects and the word ‘Trilemma’ has been used more in 2022 than perhaps any of us expected at the end of 2021. That was quite a fashionable thing to talk about a decade ago.

Energy security clearly has been a significant issue and our engagement with government during the period immediately after the crisis emerged in the Ukraine was very intensive. We proposed a plan to government to reduce dependence on gas within five years.

This industry has always been about scaling up, it's very much in the DNA. So, we know how to do it and we think that we have the ability to deliver at scale, but clearly the limitation has been up to now, how fast you can develop and consent wind farms - and that's a limitation which is coming to really acute sight, during the period we met with the prime minister. We met with other senior ministers during the period after the invasion and talking about how we speed up has been very much a key thing and as a result, the Prime Minister has introduced an offshore champion and an offshore wind acceleration task force, which I vice chair with the energy minister.

We are really focused on the tools that we have available to help us to really speed up in the short term. Whether that's increasing the resourcing around the bodies that need to help consent wind farms, creating clearer guidance, speeding up the statutory processes, moving to annual auctions - which is something that we lobbied for a long time, bearing in mind this year's auction, which is released its results it’s just three years since the previous one delayed, partly due to COVID.

We have to really speed up that whole process, more regular leasing, more transparency about the roadmap, but I also think as we move towards the next phase of development of the industry in particular, like say maybe post 2030, we're going to be getting into a phase where not only are we consenting new wind farms, but we also start to think about decommissioning some of the first ones and repowering some of the bigger ones.

So, this is going to need a much more streamlined, dedicated regulatory framework for offshore wind, as it becomes a key part of the UK's economic backdrop. At the moment, you have a scenario where all of this is regulated by different bodies and I think in the future, we may look to bring about a more streamlined approach, maybe similar to the model that's in place in the oil and gas industry.

These are the key things to think about on our side,  but on the industry side we have to do more work to industrialize. We've got new emerging technologies, like floating offshore wind, which is a great opportunity, but it needs to be industrialized and scaled up. These are challenges that we need to work on. We've got experience in this kind of scaling up process, but let’s not underestimate the significant challenges that are there as well. So, there's things to do on both sides, but the good thing is we're talking to each other, we're working together collaboratively between industry and government.

I think we have perhaps more than ever, a consensus within all political parties and major stakeholders that offshore wind is very much the key to the trilemma, be that on energy security, be it on cost reduction for people or on sustainability.