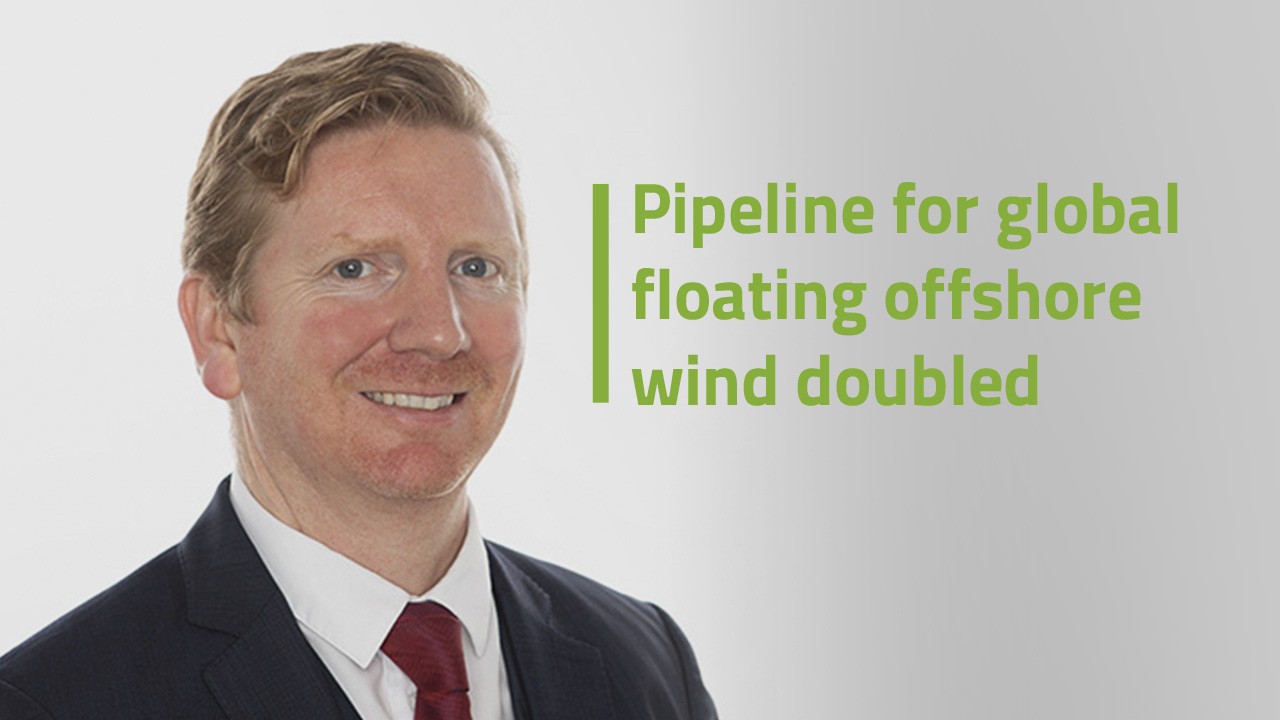 RenewableUK has published an insightful report investigating the growth of offshore wind around the world. The EnergyPulse document shows that the capacity of floating offshore wind projects has more than doubled in the last 12 months – from 91GW in 2021 to 185GW. That’s an increase in number of projects from 130 to 230. The report considered projects in any stage from those in the early development to others under construction and fully operational.

Having long been recognised as a pioneer and innovator within offshore wind, it is important to compare the UK’s development in the sector against the worldwide landscape. The latest report demonstrates that the UK maintains its global lead in floating offshore wind with the largest planned portfolio at 33,259MW of announced projects. Much of this growth in the UK has been the result of development in the North Sea, Celtic Sea and the North Atlantic Ocean, where the floating offshore wind pipeline has risen from approximately 23GW only a year ago. Today, approximately 18% of the global floating offshore wind portfolio is in the UK – the majority of which is located in Scottish waters. This is particularly impressive when compared to other individual countries – Sweden has 21,060MW of announced projects (11% of global capacity), Ireland has 12,050 (10%), the USA has 17,244 (9%) and South Korea has 15,944 (9%).

Looking further at capacity and opportunity around the world, 121MW of the global pipeline is already fully commissioned in 9 projects across 7 countries. There is also 96MW under construction, 288MW consented or in pre-construction, 31GW in planning or with a lease agreement and 153GW in early development or going through the leasing process.

Europe continues to dominate the sector with 58% of the worldwide floating offshore wind capacity. Further afield, projects located on the west coast of the USA, south east coast of Australia and in South Korea generate most of the remaining global capacity.

2022 has been another turbulent year for energy markets around the world, aggravated by the war in Ukraine, inflation and the significant rise in general cost of living. To support energy security, the UK government recently announced a return to fracking and new oil and gas leasing rounds in order to boost domestic energy generation. This has sparked some concern that investment could move away from green energy as policy makers look for more immediate solutions to current issues, but there is still plenty of opportunity for growth in renewables.

In fact, the oil and gas industry is already turning to floating offshore wind technology in an attempt to begin decarbonisation of the sector. Cerulean Winds and Ping Petroleum UK committed to creating one of the UK’s first offshore oil and gas facilities powered by floating offshore wind only this year. This demonstrates the direction of development for traditional energy companies and paves the way for a net zero future.

Another on-going challenge is that of cost reduction. As infrastructure, technology and cross-sector collaboration improves, so too will the efficiency with which floating offshore wind energy is generated, stored and transported. Rapid upscaling of the industry will further facilitate competitiveness and result in benefits for both the sector and end-user.

Looking to the future

This latest EnergyPulse report postulates that by the end of 2023, floating wind capacity could reach 11GW in the UK, 21GW in Europe and 41GW globally. This demonstrates the potential power for floating offshore wind to support net zero targets and drive growth of green energy around the world. Now is the time to invest, to refine and innovate. The opportunities are there – companies, stakeholders and policy makers must take them.

Looking at the demand for floating foundations, all forecasts point to significant growth in the coming decade. Highest demand is coming out of the UK and Ireland, followed by South Korea, Sweden and the USA in the years leading up to 2031. Interestingly, forecasts suggest that demand for new floating offshore wind will surpass that of its fixed counterpart in the next 10 years around the globe. This trend is expected to be most pronounced in the UK.

The report also predicted a shift in market share of total offshore wind generation, which could be reflected in the distribution of floating offshore wind projects. For example, the majority of development will likely move away from North Europe and towards East Asia in the next few years with construction of new offshore wind farms in Chinese seas. By the mid to late 2020s, new regions such as East Europe are expected to record notable capacity in the area, swinging the majority market share back to Europe.

“The growth of floating offshore wind is surging ahead at a phenomenal rate year on year around the world. We’re proud that the UK is a global leader in this innovative technology with nearly a fifth of the total pipeline – significantly greater than any other country.

“In the years ahead, as we build projects further out to sea where wind speeds are even stronger, floating wind will play a central role in proving cheap, clean electricity for British homes as well as boosting our energy security.

“It also offers a significant opportunity to build up a whole new industry in the UK, with a world-class supply chain which will enable us to export our expertise and state of the art technology worldwide”.

For more in-depth insights into the current and future floating offshore wind market, as well as details and predictions for the wider renewable energy sector, EnergyPulse provides a unique, easy-to-use and powerful analysis tool – available to all RenewableUK members.