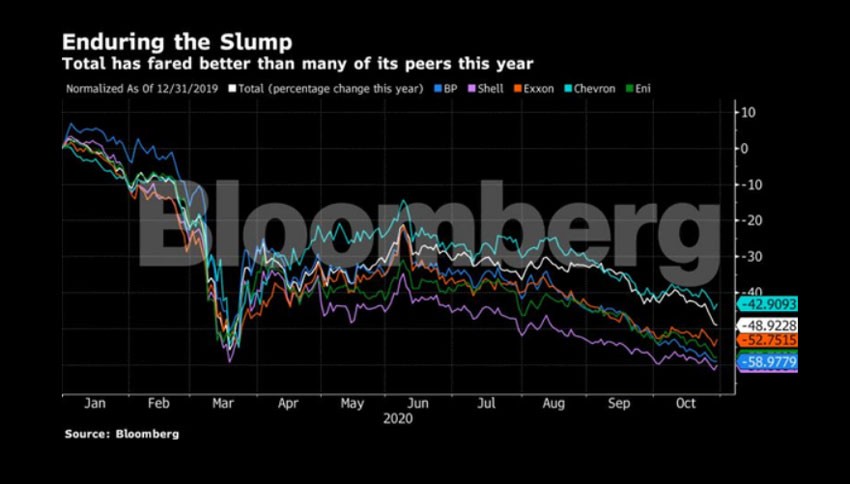 Total SE continued to ride out tough times for the oil industry by posting third-quarter profit that exceeded the highest analyst estimate, paying down debt and maintaining a generous dividend.

The French energy giant, which has fared better than its rivals through the severe downturn caused by the coronavirus, still offered some cause for concern. The company boasted of its resilience to oil at $40 in a week when prices slumped below that level as the second wave of the pandemic took hold.

The oil market remains uncertain and dependent on the speed of the global recovery, Total said. Still, the company’s results were a bright spot in a gloomy oil industry. Third-quarter adjusted net income was $848 million, down 72% from a year earlier but well above the average analyst estimate of $478 million.

“The group benefited during the third quarter from a more favorable environment, with oil prices above $40 a barrel thanks to strong OPEC+ discipline as well as the demand recovery for petroleum products for road transportation,” Total Chief Executive Officer Patrick Pouyanne said in a statement on Friday.

While Royal Dutch Shell Plc also reported better-than-expected earnings, the company is struggling to match its French rival’s appeal to investors after slashing its dividend in April. Total is the only European major to leave its payout unscathed this year.

Total’s gearing, the ratio of net debt to capital, was 22% on Sept. 30, down from 23.6% three months earlier and well below the level of many of its peers. Debt-adjusted cash flow was $4.3 billion, down 41% from a year earlier.

Most of the company’s profit came from oil and gas production and gasoline sales at service stations. Total’s liquefied natural gas business was hit by plunging prices and its refineries posted a loss because of weak demand, especially for jet fuel.

To weather the continuing downturn, Total cut its net capital expenditure forecast for this year by $1 billion to less than $13 billion. It also said it will surpass its $1 billion savings target for operating expenses.