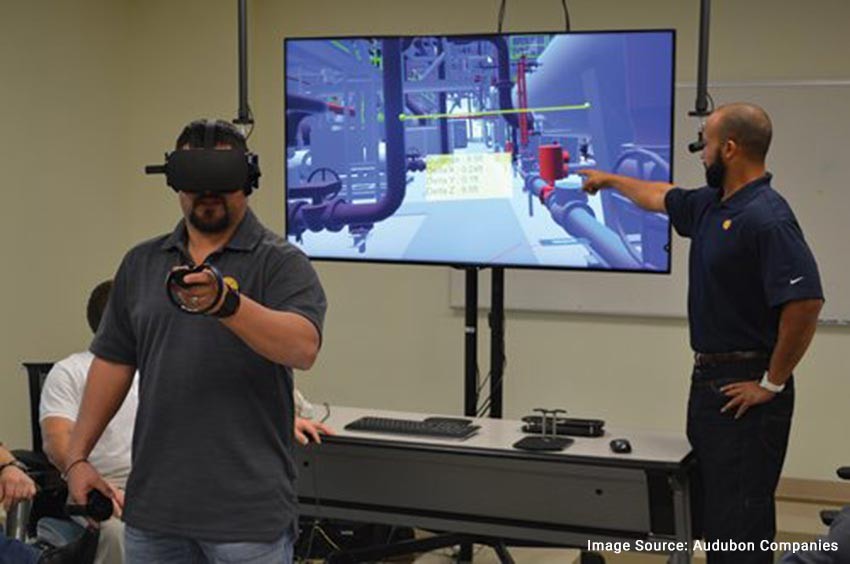 Digitalization has emerged as a powerful lever for helping oil and gas operators reduce costs and improve efficiencies amid the low-price environment. This is particularly the case in the offshore sector, where long development cycles, high capex and opex, and added safety risks present unique challenges that are often not encountered in onshore projects. As this article will discuss, applying technologies that require a relatively small up-front investment, like virtual reality (VR) and digital twins, can unlock value and savings for offshore operators across every phase of the development lifecycle – from front-end planning and design, through construction, and eventually into operation.

After a prolonged lull in deepwater activity following the 2014 oil market decline, the offshore industry is beginning to show new signs of life. In the 18 months spanning from January 2017 to June 2018, more than $110 billion worth of projects worldwide reached final investment decision (FID) – up from $50 billion in 2016.

While confidence in offshore exploration and production continues to grow, many challenges remain for owners, suppliers, and EPCs. Among these include the potential of having to operate in a sustained low-price environment, market volatility, and increased pressure to deliver projects on time and within budget. In the midst of the current climate, operators have had to take aggressive measures to reduce project capex and opex, while accelerating time to first oil.

Technologies like digital twins and immersive VR models, which can help companies improve the way they work, are increasingly proving their worth in helping to achieve those goals.

Many use cases exist for virtual and/or augmented reality in oil and gas. One that lends itself particularly well to the offshore environment involves developing an interactive 3D model that can be used by operations personnel to familiarize themselves with a facility before it is physically built. This is the approach currently being deployed by Shell on its Vito platform.

Vito reached FID in April 2018 and will be Shell’s 11th deepwater host in the Gulf of Mexico. The project features a low-cost development approach and has a highly competitive forward-looking break-even price estimated to be less than $35/bbl. The floating production system is currently under construction in Singapore and is scheduled to achieve first oil in 2021.

Shell has been an early adopter of digital technologies since the 1970s. Today, the company continues to take aggressive steps to stay at the industry’s forefront by using digital transformation to increase its competitive advantage and overcome the challenges posed by the low-price environment.

The digital twin is a standalone, interactive 3D model delivered in the form of a single executable file. As part of the scope of work for the Vito project, Audubon Companies provided Shell with all of the required hardware and software to build out VR stations at multiple locations. Shell is currently using the Vito digital twin at its Woodcreek facility in Houston and in the Vito operations base at its Robert Training Center in Louisiana. It is also being utilized by personnel overseas in the company’s Netherlands-based offices.

With Vito currently under construction in a shipyard nearly 10,000 miles from the Gulf Coast, the use of VR is immensely valuable in that it gives operations personnel the capability to virtually walk the deck of the facility and familiarize themselves with a fully constructed version of the topsides without ever leaving the office. This represents a clear departure from how the vast majority of offshore developments are executed today and will enable the Shell team to maximize its operational readiness before the platform reaches its commissioning phase. It will also translate into improved bottom-line performance by offsetting international travel costs and compressing operational onboarding timelines.

Entering the immersive environment presents zero risk and allows users to visualize the topsides layout and better understand how it will look and perform in the real-world. Operators are able to validate 2D drawings and locations of equipment, make virtual rounds, plan routes, and confirm that operating procedures are executable in the way that they are written. The digital twin also serves as a useful tool for developing emergency evacuation plans, determining egresses, and identifying potential health, safety, and environmental risks (HSE), which is often not feasible with traditional 2D and 3D model reviews.

Additionally, with multi-user capabilities, team members can jointly complete tasks, take action, and communicate just as they would in a real-world scenario, regardless of geographic location. This functionality can be used for training purposes as well, where one individual assesses the competency of a trainee performing a certain task – with zero HSE risk to either party or the facility. All of these advantages are derived from the VR application and would otherwise not be possible, even if Vito was being constructed in a shipyard in Texas.

Ultimately, by embracing VR technology, Shell has effectively reduced the distance between its operations team and the Vito platform. In the coming months, personnel will continue to use the interactive digital twin and VR stations to acclimate themselves with the topsides and prepare for commissioning of the facility in 2020.

While Shell’s use of VR on Vito demonstrates the many advantages that applying the technology offers after a topsides design has been finalized, it can also be used to unlock value earlier in the project timeline by increasing stakeholder engagement.

VR solutions overcome the limitations of traditional 2D and 3D model reviews, which often fail to engage stakeholders on a level that solicits detailed feedback. In the traditional review process, design changes are looked at by the design team, the owner’s project team, and occasionally facility leadership. The changes, however, rarely make their way down to the final end-users, such as equipment operators, technicians and craftsmen. VR offers a more engaging way for individuals to walk themselves through the model on their own time and provide detailed input to the design team. The immersive digital twin gives the user a very personalized, self-driven overview of the project, which evokes a greater sense of ownership of the design.

VR gives the user the sensation of physically walking through the facility, even when in the conceptual stages or when distance is a factor. Designers and operators have the opportunity to check for things like operability, safety, and placement of equipment. The use of VR also allows subject matter experts and trainers to assist in the development of safe work practices even if they are physically unable to go offshore.

Additionally, VR can be used as a simulation tool, with the user navigating throughout the facility and visualizing exactly how it will come together at different points during the construction timeline. For example, full scale digital cranes or equipment can be inserted into the virtual environment, allowing the user to verify dimensions and determine if objects or pieces of equipment will introduce problems spatially. In doing so, stakeholders are able to make design adjustments or plan interventions before arriving on location. In many cases, this directly translates into cost savings by reducing the likelihood of late-stage field change orders, which often lead to costly project delays.

The capabilities and benefits afforded by VR can also be realized on brownfield projects. In such cases, 3D laser scanners and surveying tools, such as LIDAR are brought in to map the existing physical facility. Using data gathered from these methods, along with 2D drawings and plant design models, an up-to-date digital twin of the facility can be created and leveraged just as it would in a greenfield.

Oil and gas operators have emerged from the downturn leaner and more efficient than ever. However, the need to reduce development costs, improve work processes, and increase efficiency remains key to long-term success. This is especially the case in the offshore environment, where long project cycles and increased capex and opex requirements present operators with added risk that is often not seen in onshore projects.

In the midst of the industry’s current state, which many are acknowledging may be “the new normal,” producers and suppliers must be open to applying new technology in order to remain competitive.

Unlike many of the solutions being applied across the digital oilfield today, VR is especially attractive and unique in that it requires little up-front investment on the part of the user, both from a standpoint of cost and manpower resources. The technology is widely applicable to disciplines ranging from design teams to operations personnel and can generate immense value by improving engagement and communication between stakeholders, leading to better project outcomes.